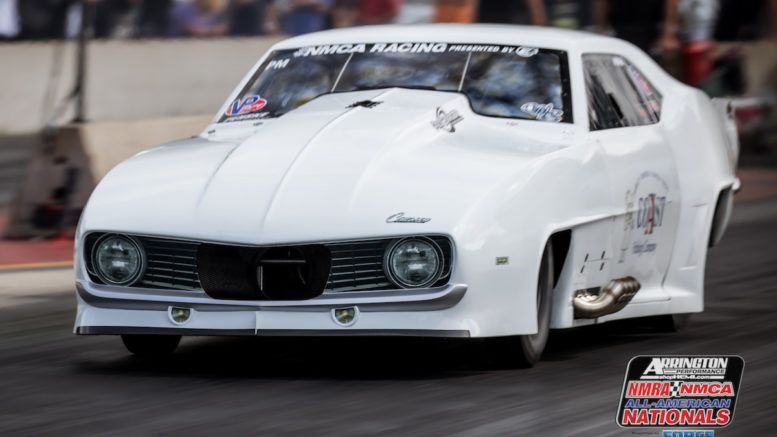 More than 650 racers rolled in for the Arrington Performance NMRA/NMCA All-American Nationals presented by Force Engineering, Aug. 27-30 at U.S. 131 Motorsports Park in Martin, Michigan.
It’s a record-setting and remarkable number that included a perfect mix of series regulars and series rookies ready to put it all on the line at the facility whose slogan is “The Fastest Track in Michigan.” Racers prevailed over heat, humidity, rain, and raucous thunder early in the weekend to heap on the horsepower when cool and crisp air came later in the weekend.
While there were fewer fans in attendance in accordance with current state guidelines, they were engaged and eager to see which racers would go all the way to the Aerospace Components Winner’s Circle after several rounds of close competition.
VP Racing Lubricants Xtreme Pro Mod racers were in rocket-mode, with seven of eighteen of them running 3.70s in qualifying, and others right there with 3.80s and 3.90s. Jim Widener set the pace for the second race in a row with a 3.70, but it was Eric Gustafson and Adam Flamholc who were pulling into the waterbox for the highly anticipated final round of eliminations. They leaped off the line with nearly identical reaction times, and it was anybody’s race until Flamholc was forced to pedal it and Gustafson went on to a 3.70 to win.
NMCA and NMRA drivers joined forces for Mickey Thompson Tires/VP Racing Madditives Street Outlaw, and Rob Goss led qualifying with a 4.28 in his Challenger. He was on a roll all weekend long, and wrapped up the win with a 4.27 against Alan Felts, who wasn’t far behind with a 4.35.
In Holley EFI Factory Super Cars, Drew Skillman sailed to a 7.62 in his Mustang Cobra Jet to lead qualifying, and he remained on point on his way to the final round of eliminations to face his father, Bill Skillman. Bill Skillman ran uncontested as Drew Skillman wasn’t able to make the call to the lanes.
While the nitrous plumes in ARP Nitrous Pro Street were aplenty, there were none from Tony Gillig’s naturally aspirated Cutlass, which carried him to a 4.36 to set the pace in the category. Gillig, who won at the NMCA event at World Wide Technology Raceway in July, wanted to back it up, and he did just that with a 4.39 against Derik Timmer, who trapped a 4.52.
Read more >