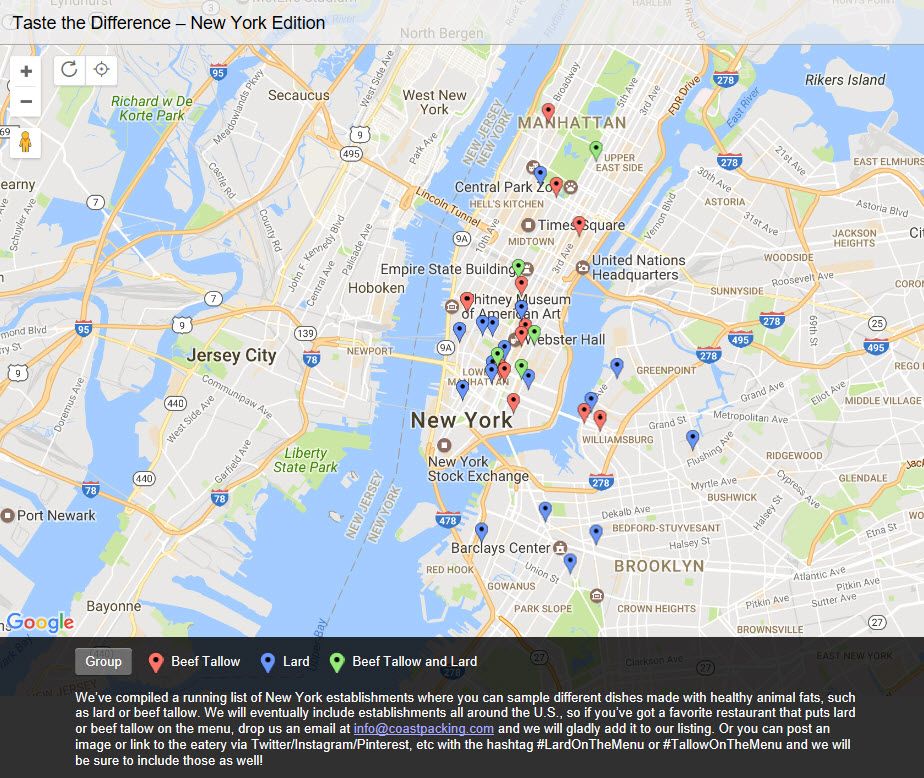 First, L.A.  Now, New York — where foodies in Manhattan and Brooklyn can “Taste the Difference.”

Following last quarter’s debut of its innovative online “taste map” of Los Angeles, Coast Packing Company, the leading supplier of animal fat shortenings in the Western U.S., is again putting its website where its taste buds are, mapping Big Apple restaurants and eateries where locals can try dishes prepared with lard or beef tallow.

The initial litany – some 35+ strong – just scratches the surface and will expand over time.  Still, discerning diners will find a mix of gastronomic stars and popular hangouts: in Manhattan, from Eleven Madison Park, Estela and Flora Bar to Momofuku Ssam Bar, Bar Jamón, and Pasquale Jones; and in Brooklyn, such mainstays as Carnal, Roberta’s and Peter Luger.

“The best way to really understand how much our food benefits from healthy animal fats – as opposed to heavily processed, industrially produced substitutes – is to go out on the town and experience what New York’s amazing chefs are up to,” said Eric R. Gustafson, Coast Packing CEO.  “While the conversation about the health benefits of any given food or ingredient is continuous – and, indeed, will probably lack an endpoint in any of our lifetimes — most of us have a pretty fair idea of what tastes good (even if we can’t always say why).”  Artificial trans fats are out, and minimally processed animal fats – in the form of lard, derived from pork, and beef tallow – are decidedly making a comeback, he noted.

“In terms of freshness, flavor and texture, there really is no comparison, which is exactly why we’re so delighted when consumers taste for themselves,” Gustafson said.  “Toward that end, we at Coast Packing are continuing our efforts to compile a running list of establishments where consumers can let their palette make the call. Having begun in Los Angeles, we have now expanded that list to New York City – and Chicago won’t be far behind.”

Have a favorite restaurant that puts lard or beef tallow on the menu (or just in some of its prize dishes)?  If so, drop Coast an email at info@coastpacking.com and the company will put it on the map – in L.A. , New York or anywhere in the U.S.  Consumers can also post an image or link to the eatery via Twitter/Instagram/Pinterest, etc., with the hashtag #LardOnTheMenu or #TallowOnTheMenu.