And the 2021 Coast Packing #LardLovers Recipe Contest Winners Are… Jamie Parchman of Harlingen, TX and Mary McShack of Montgomery, AL 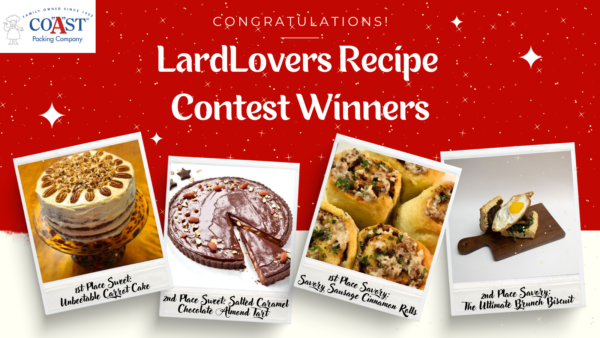 And the 2021 Coast Packing #LardLovers Recipe Contest Winners Are… Jamie Parchman of Harlingen, TX and Mary McShack of Montgomery, AL

The people again have spoken – in this case, a group of judges skilled in the culinary arts – awarding top prizes to four contestants and their delectable creations, in Coast Packing Company’s Fifth Annual #LardLovers Recipe Contest.

A month-long showcase of what the venerable animal fat can do in the hands of talented home chefs, the contest’s top honors went to first and second place entries in sweet and savory categories.

For her Unbeetable Carrot Cake, Jamie Parchman of Harlingen, TX, took top prize in the Sweet Category for a creation the judges called “a hit across the board by all tasters.” Jamie will receive a KitchenAid® Artisan® Series 5 Quart Tilt-Head Stand Mixer (estimated retail value $430). “Lard lends a texture, a flakiness, to baked goods like crusts and biscuits that you can only get with lard,” she said.  The judges agreed: “The lard made the cake very moist!  Nice texture overall; the icing pairs well with flavors and sweetness of cake.  Citrus and pecans were nice change.”

In the Savory Category, first prize went to Mary McShack of Montgomery, AL, for her Savory Sausage Cinnamon Rolls. “Lard is my go-to, especially for pastry,” she said.  The judges gave the recipe a big thumbs up: “A delightful recipe, a pleasure to make, and definitely a crowd pleaser.  You could make for breakfast, brunch, a snack, a dinner side, lunch, to throw into your kid’s lunchbox.  The sweetness from the cinnamon and brown sugar balanced the spicy sausage well.  In sum, addicting.”  Mary will take home a Le Creuset Signature Enameled Cast Iron Oval Dutch Oven,valued at $300.

Sticking with the Savory Category, second prize went to Timothy Williamson of Valrico, FL for his Ultimate Brunch Biscuit, good for a $140 Ruffoni 6-Piece Olivewood Tool Set. Said Tim: “Lard is so versatile and easy to work with, I really tried to showcase that here!”

Coast Packing’s #LardLovers Contest draws its inspiration from the annual December 8 observance of #NationalLardDay, a celebration of a traditional, flavorful farm fat – pure lard, derived from pork – that is now enjoying a resurgence within America’s food culture, in restaurants (especially those featuring ethnic specialties), fast food operations and home kitchens.  Last year, #NationalLardDay earned a shout-out on an episode of NBC’s “Late Night with Seth Meyers.”

“Now in its fifth year, our #LardLovers Contest has become a platform for culinary creativity and a tribute to the versatility of lard as a traditional ingredient with tremendous staying power,” said Eric R. Gustafson, CEO of Coast Packing, the West’s largest supplier of animal fat shortenings.  “Our enthusiastic congratulations go out to Jamie, Mary, Tim and Renee (again), as well as all of those who contributed to making this the biggest and best #LardLovers Contest to date.”

During the run of the contest – which opened online on Nov. 1 and ran through Nov. 21 — Coast welcomed unique, unpublished recipes that use lard, in sweet or savory categories.  To enter, contestants submitted recipes via the Coast contest website or Facebook.  The contest was open to those 21 and over, and no purchase was necessary to enter. Recipe submissions were posted on the Coast Packing website along with images of the resulting dishes.

To prepare and assess the top recipes, the judging panel featured, in the Sweet Category, Corporate Chef Miki Hackney and her team from Melissa’s/World Variety Produce, Inc.  of Vernon, the largest distributor of specialty produce in the United States.  Prepping and judging contenders in the Savory Category was Chef Jacob Matthew, who works at a Michelin-starred restaurant in New York City.

Winners were chosen based on flavor, creativity/originality and visual appeal.  This year, Coast asked contestants to write in 25 words or less what they like best about cooking with lard [see: “What Do Contestants in Coast Packing’s #LardLovers Contest Find Lovable About Lard? Let Us Count the Ways”].