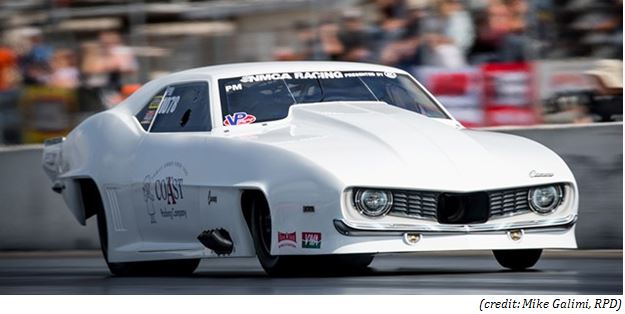 When Coast Packing Company’s ’69 ProCharger Pro Mod Camaro queues up for a run, you best not blink.

As always, Jason Lee of PTP Racing handles the tuning with a Haltech Elite 2500. Improvements on the 2570-pound racecar for the 2019 race season include chassis updates, refinements and weight reduction by Tim Lyons at Lyon Custom Motorsports, with a Noonan Engineering 4.800 bore space 526 cubic-inch Hemi providing the power.

As recapped by Mike Galimi of RacePagesDigital, ”Coast Packing’s R&E Racing team made a big noise last year in NMCA competition with Gustafson behind the wheel. They scored a win during the NMRA/NMCA All-Star Nationals and crushed the door-slammer record for centrifugal supercharged combinations for most of 2018 with a 3.755 at 200 mph run.”

Back in Bradenton, the 2019 season is just getting under way. Stay tuned for what figures to be, in Gustafson’s words, “an awesome year ahead.”