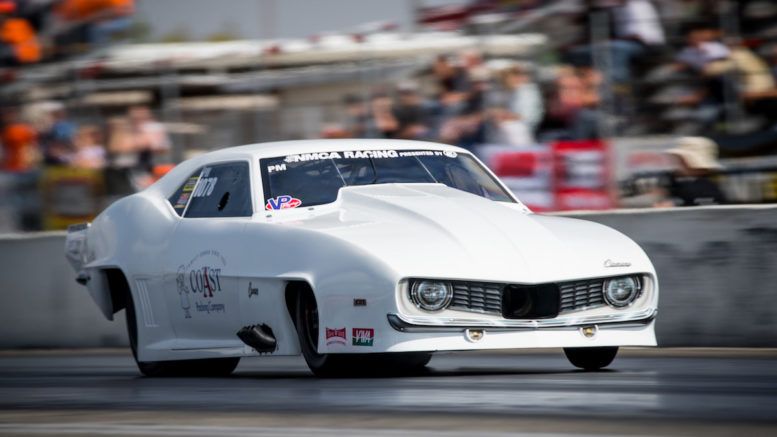 His Gary Naughton Race Cars-built chassis is topped with a carbon fiber 1969 Camaro body made by Cynergy Composites and painted and airbrushed by Larry Jeffers Race Cars, and a 526ci Brad Anderson Enterprises Hemi and ProCharger F-3R-136 sit under the one-piece front end. The car is equipped with a Liberty’s transmission and rolls on a Mark Williams Enterprises rear-end, Strange Engineering suspension components, struts and shocks by Precision Racing Suspension and Hoosier tires, and 2017 NMCA VP Racing Fuels Xtreme Pro Mod champion Steve Summers handled the wiring and finishing touches.

He ran to a 3.91 to qualify in the thirteenth spot, and despite turning on the red light and losing to Don Walsh Jr. in the first round, he stayed in the throttle in the impromptu test pass to post a 3.93.

“Until you put the car together and run it, you don’t know exactly what it will be like, and when things weren’t going the way we thought they would go, we realized we had a case of the new car blues,” said Gustafson. “After the race, we sent the engine back to Brad Anderson just because we wanted to see how it looked, we sent the shocks and struts back to Precision Racing Suspension for a little work and we looked at some other things.”