Home > Coast Blog > Dining Out > FatMap > What Do Contestants in Coast Packing’s #LardLovers Contest Find Lovable About Lard? Let Us Count the Ways 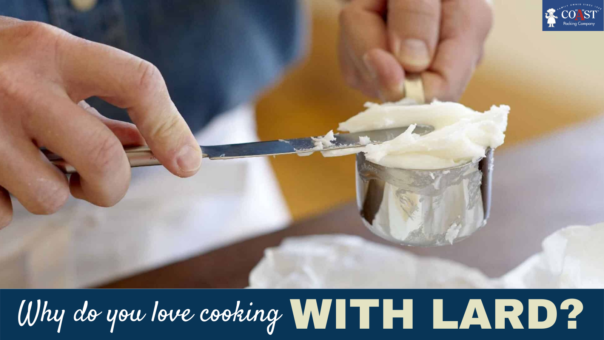 When It Comes to the Storied Farm Fat, Home Cooks Say There’s a Lot to Like

Lardlovers are anything but neutral about their favorite ingredient.

Those partial to the popular farm fat invariably evoke memories, family traditions, a reverence for the kitchens in which they grew up and the dining room tables where they enjoyed memorable meals and unforgettable people.

That said, lardlovers are also savvy cooks, familiar with the panoply of alternatives – animal, vegetable and what-have-you – that flavor today’s culinary concoctions.  We asked contestants in Coast Packing’s Fifth Annual #LardLovers Contest to weigh in on where lard fits in their pantry and in their cooking lives.  Dozens took us up on our request; excerpts follow.

“My family’s health and well-being is priority. In today’s world, it’s comfort from my kitchen that sustains us. Nutritious meals and treats made with natural fats like lard gather us together, keeping our most valued traditions alive and well.”

“I believe in cooking with whole foods. Using lard… also shows respect for the animal that provided us with this special ingredient to prepare our food.”

“I grew up on a farm and my mother rendered lard every year. It adds a delicious flavor to so many foods!”

“I love to cook and bake with lard, especially with donuts, fritters, vegetables or fries. Lard is easy to use in different applications. It also makes my baked goods crispier and airy.”

“I use lard to replace butter. On the grill, I use it on my meats and even melt and inject it!”

“I’m turning 70 in a few days, and have been cooking and baking with lard since I was 7 years old, thanks in great part to my grandma and mom showing how much better recipes come together with lard. Now my daughter and granddaughters are cooking and baking using lard.”

“Lard adds a rich, velvety mouthfeel that butter cannot quite achieve. That’s why I love using lard in pie dough, biscuits, and other baked goods.”

“Our neighbors raise heritage hogs on their farm and as a result, we get lots of farm-fresh lard they process there. We use lard in so much of our cooking – especially in apple dumplings!”

“My grandmother and mother taught me that lard can be a useful ingredient when you want flavor and tender, flaky baked products. I love baking with lard for that reason. I use lard every time I want to achieve the “wow, this tastes amazing” comment from family and friends.”