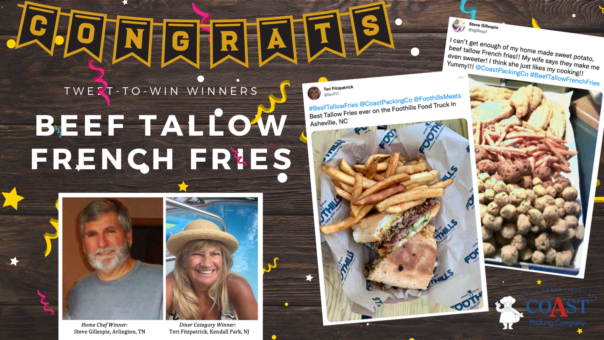 Continuing its magical, mystical hold on imaginations and palates alike, #BeefTallowFrenchFries have inspired award-winning declarations from creative foodies Steve Gillespie and Teri Fitzpatrick, both of whom took top honors in Coast Packing Company’s Fourth Annual “Tweet-to-Win” Contest, a celebration tied to the July 13 observance of #NationalBeefTallowDay (and, of course, #NationalFrenchFryDay), the company announced today.

In Coast’s latest quest for the public’s most engaging tweets proclaiming their hankering for beef fat French fries (the menu item that made a certain popular burger chain famous), Coast Packing — the largest supplier of animal fat shortenings in the West — attracted the passionate and the poetic in record numbers.

This year’s Tweet-to-Win contest showcased home chefs and discriminating diners alike. Across both categories, more than 150 entries made the cut; tallow fans paid tribute to some 92 eateries, from toney steakhouses like Mastro’s to notable chains Smashburger and Popeye’s, to local gems like Salt & Time in Austin, Monkey Burger in Tucson, and The Hitching Post in Solvang, Calif.

Winner Steve Gillespie, from Arlington, Tenn., served up this tweet: Gillespie is now the proud owner of a Breville Smart Fryer (valued at $150), the first deep fryer with a dedicated twice-cooked function for super crispy French fries, along with a tub of Coast Packing beef tallow.

Meanwhile, Teri Fitzpatrick of Kendall Park, NJ claimed first prize in the Diner category, a $200 gift certificate to Sammy’s in Mendham, NJ, a beef tallow-friendly steakhouse, with this tweet:

Among the other winners in the Home Chef category, Rick Fryar of Cottage Grove, Minn.  can now unsheath his Weston French Fry Cutter, the second prize award valued at $120, thanks to his tweet, “MMM… Homemade fries”, while Andrea Anderson of Olympia, WA took home the “Beef Tallow French Fries Book Set” ($40 at retail): The Fat Kitchen (How to Render, Cure & Cook with Lard, Tallow & Poultry Fat) and Fries! An Illustrated Guide to the World’s Favorite Food, thanks in part to her tweet: Over in the “Diner” category, Sheila Vives of Pocahontas, AR nabbed second prize, a Deep Fryer Cookie Gift Basket valued at $110, with this tweet: Tweets Galore: The Best of the Rest:

In honor of this lovely treat, I shall present a haiku to my esteemed Tweet-readers:
Beef tallow French fries
A delight for all the fam
“Beef tallow!” we smile

Street Frites has my favorite beef tallow French fries. Tracking them down can be a fun challenge since they’re mobile. On the bright side, the scenery is always fresh and if I run to the food truck, I figure it’s a calorie wash #BeefTallowFrenchFries

Belcampo in LA has THE most drool worthy #BeefTallowFrenchFries I’ve ever had!  I would place these tallow fries on an Altar above all others &amp; bow to them in homage!  I would give them offerings of mustard, ketchup and mayonnaise and sing their praises to all!

Fries cooked in beef fat are so very divine
They make my tummy pine
And my voice whine
When I think of their crispy salty shine
Beef fat makes my homemade fries so divine!
#beeftallowfrenchfries

“The message of our ‘Tweet-to-Win’ contest is, ‘capture the deliciousness in 280 characters and inspire others to do the same,’” said Eric R. Gustafson, Coast Packing CEO.  “As we did last year, we made a special effort to showcase those restaurants committed to preparing beef tallow fries for take-out or delivery, and those dedicated home cooks working the kitchen.

“In terms of freshness, flavor and texture, there really is no comparison to beef tallow French fries, which is exactly why we’re so delighted when consumers can taste for themselves,” Gustafson said.  “Toward that end, we at Coast Packing are continuing our efforts to demonstrate that farm fats like tallow are tasty, traditional and amazingly palate-pleasing.  We encourage everyone to tweet their love for French fries fried in beef tallow far and wide.”

As befits the contest theme, later this month Coast will release an updated version of the Ultimate French Fry List, which made its debut on National Beef Tallow Day in 2019.