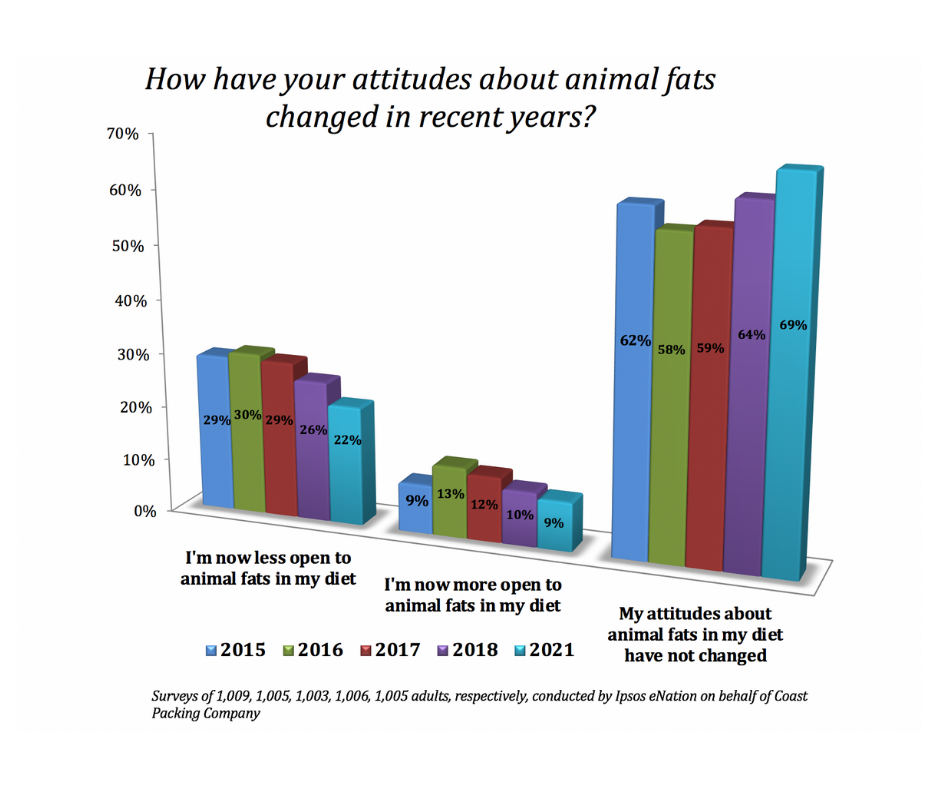 As in so many walks of life, it’s been an unprecedented year in food.

Amid COVID-19 lockdowns and quarantines, dine-in restaurants (that remain in business) embracing take-out and delivery, and sporadic shortages inhibiting an earnest return to the kitchen, the results of the fifth Coast Packing Company/Ipsos Research Animal Fats Study reflected the topsy-turvy time that commenced in March 2020.

The 2021 iteration of the survey from Coast, the number one supplier of animal fat shortenings in the Western United States, polled 1,005 adults nationwide on their attitudes and consumption patterns around animal fats – and found little change in consumer opinions and behavior.  As in Coast’s original baseline survey, conducted in November 2015 and revisited annually since, respondents were asked whether they were more or less open to animal fats and whether those views extended to actual behavior.  The 2019/2020 Coast-Healthy Fats Coalition (HFC) survey replaced the 2019 wave.

In the latest survey, it appears that no news is news: people’s attitudes toward animal fats, as well as their consumption of animal fats, were reported as being unchanged in recent years at a higher incidence rate than in all four of the prior waves.  The findings suggest that pandemic restaurant closures may have put a damper on people seeking out a different diet, a trend that holds true for the general adult population as well as for younger respondents.

“Nearly a year on, it’s clear that pandemic has disrupted habits throughout ‘normal’ life, not the least of which was what and where to eat, and with whom,” said Eric R. Gustafson, CEO, Coast Packing.  “As our latest Coast/Ipsos survey shows, COVID effectively put the resurgence of traditional animal fats on pause.

“That said, consumers indicated that they understand that animal fats are a net positive for health and well being,” he said.  “We were again pleased by the insights and thoughtfulness expressed in the verbatim responses.  However the pandemic has affected their communities, today’s consumers value authenticity and want food that is made with integrity and respect for culinary traditions.  That’s why the natural makeup of both lard and tallow matter so much.  These products are best when minimally processed, which is consistent with the entire thrust of food and cooking right now.”

The survey included a question aimed at eliciting open-ended responses from a subset of the sample: “Why are you more open to animal fats in your diet?” Verbatim feedback, which skewed toward men and younger respondents, revealed a range of insights about increased openness to animal fats:

“During times of hardship and uncertainty, consumers gravitate to comforting and familiar products and flavors,” said Sian Cunningham, senior marketing insights specialist at taste and nutrition company Kerry Group, in SmartBrief/Food & Travel.  “As more consumers are preparing food at home, they are seeking out meals and desserts with classic flavors — mac and cheese, pizza, brownies and s’mores, for example — to provide that sense of comfort and normalcy.”