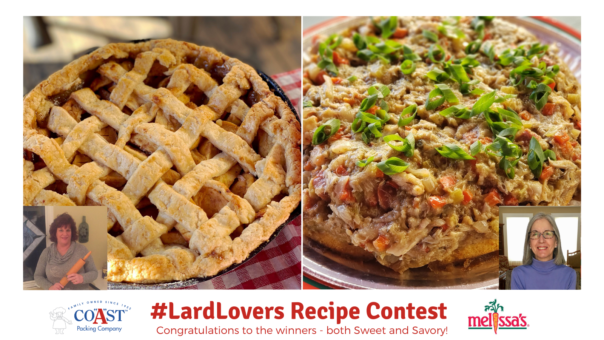 The people have spoken – in this case, a group of judges skilled in the culinary arts – awarding top prizes to four contestants and their delectable creations, in Coast Packing Company’s Fourth Annual #LardLovers Recipe Contest.

A month-long showcase of what the venerable animal fat can do in the hands of talented home chefs, the contest’s top honors went to first and second place entries in sweet and savory categories.  For her winning Bourbon Infused Apple Pie recipe — a creation the judges lauded for its tempered sweetness — Lois Spruytte of Richmond, Mich. will receive a KitchenAid® Artisan® Series 5 Quart Tilt-Head Stand Mixer (estimated retail value $380).   Said Lois: “Thank you so very much! The announcement made my day!”

Coast Packing’s #LardLovers Contest draws its inspiration from the annual December 8 observance of #NationalLardDay, a celebration of a traditional, flavorful farm fat – pure lard, derived from pork – that is now enjoying a resurgence within America’s food culture, in restaurants (especially those featuring ethnic specialties), fast food operations and home kitchens.  This year, #NationalLardDay earned a shout-out on the Dec. 9 episode of NBC’s “Late Night with Seth Meyers” https://archive.org/details/KNTV_20201209_083600_Late_Night_With_Seth_Meyers/start/248.8/end/300.

“Now in its fourth year, our #LardLovers Contest has become a platform for culinary creativity and a tribute to the versatility of lard as a traditional ingredient with tremendous staying power,” said Eric R. Gustafson, CEO of Coast Packing, the West’s largest supplier of animal fat shortenings.  “Our enthusiastic congratulations go out to Lois, Lisa, Renata, Renee and all of those who contributed to making this the biggest and best #LardLovers Contest to date.”

During the run of the contest, Coast welcomed unique, unpublished recipes that use lard, in sweet or savory categories.  The contest opened online on Nov. 6 and ran through Nov. 27.  To enter, contestants submitted recipes via the Coast contest website or Facebook.  The contest was open to those 21 and over, and no purchase was necessary to enter.

Recipe submissions were posted on the Coast Packing website along with images of the resulting dishes.  To prepare and assess the top recipes, the judging panel included Coast personnel, along with Corporate Chef Miki Hackney and her team from Melissa’s/World Variety Produce, Inc.  of Vernon, the largest distributor of specialty produce in the United States.  Winners were chosen based on flavor, creativity/originality and visual appeal.

Acknowledging the impact of COVID-19 on the food scene this year, Coast asked contestants to write in 25 words or less how the pandemic has affected their willingness to experiment with ingredients from days of yore [see: “In Their Own Words, Coast Packing #LardLovers Recipe Contestants Find Comfort in Cooking with Farm Fats During the Pandemic”].