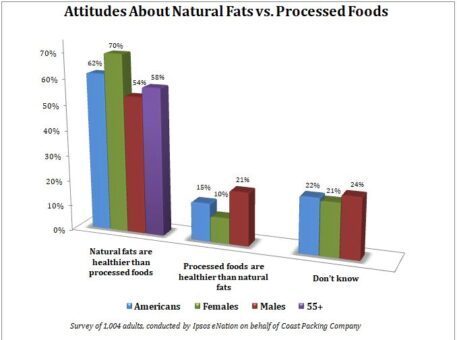 Amid Rise of Artificial Meat Substitutes, Consumers Weigh in on Relative Health Value of Traditional Fats

So say respondents in the first-ever Coast Packing Company/Healthy Fats Coalition (HFC) Animal Fats Study, conducted this spring by Ipsos Research among 1,004 consumers nationwide. On the table were the relative merits of processed foods, including artificial meat substitutes, and natural animal fats.

The survey marks the first joint project by Coast Packing, the number one supplier of animal fat shortenings in the Western United States, and the HFC, an educational initiative comprised of organizations, companies and individuals committed to clarifying the role of animal fats in the American diet.  Coast is a founding member of the HFC.

Among the survey’s key findings:

“As our first Coast/HFC survey shows, consumers increasingly get it -– they understand that highly processed foods aren’t typically conducive to promoting health,” said Eric R. Gustafson, CEO, Coast Packing. “They also recognize that the trend toward plant-based meat substitutes comes at a cost – not just at the check-out counter, but in terms of how these highly processed additions to our diet are manufactured.

“By contrast, animal fats are a net positive for health and well being,” Gustafson said. “That’s why the natural makeup of both lard and tallow matter so much.  Neither is highly processed or contains the artificial trans fats found in hydrogenated shortenings. Today’s consumers clearly value authenticity and want food that is made with integrity and respect for culinary traditions, as our survey demonstrates.”

While plant-based “meat” providers often tout the smaller carbon footprint associated with the process, one major player was taken to task this month for a lack of transparency in its reporting of greenhouse gas emissions (see the analysis by Trucost).

The Coast/HFC survey coincides with release of The Power of Meat 2020 from The Food Industry Association and the North American Meat Institute (NAMI), an in-depth study of meat and poultry through shoppers’ eyes.  This year’s survey, the 15th annual, explores consumption trends, sales growth and consumer preferences, finding that demand for meat is accelerating, with $50.5 billion in sales for 2019.

Meanwhile, according to leading British cardiologist Dr. Aseem Malhotra in The Sun, vegan and veggie meals at fast food chains are “more likely to give you a heart attack than meat burgers.”  In the article, Dr. Malhotra advised consumers “not to be fooled into believ­ing vegan or veggie is always healthy as the meals are still ‘ultra processed.’ Many contained high levels of refined carbohydrates and lower levels of protein.  Protein protects from high levels of insulin, the major trigger in heart attacks. High levels of sugar and salt were also found in many of the meals, plus ‘toxic oils.’”