And the Golden Tortilla Goes to… Sonoratown, As Flour Dusts Corn in Gustavo’s Great #TortillaTournament, Sponsored by Coast Packing 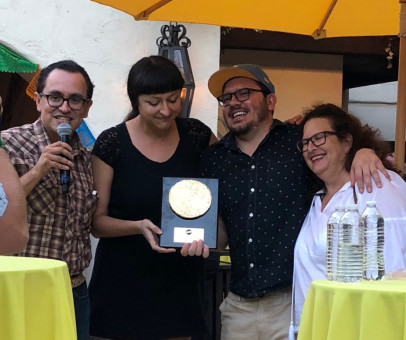 And the Golden Tortilla Goes to… Sonoratown, As Flour Dusts Corn in Gustavo's Great #TortillaTournament, Sponsored by Coast Packing

Presented by KCRW (@KCRW), Taco USA author Gustavo Arellano and KCRW Good Food host Evan Kleiman spear headed this no-holds-barred challenge pitting 64of Southern California’s most iconic tortilla brands mano-a-mano to determine which one reigns supreme. It was 32 corn vs. 32 flour tortillas with the Fuerte Four face-off taking place on Sept. 16 at the Los Angeles River Center & Gardens, in the Cypress Park neighborhood in the City of Angels.

Sonoratown, named for the area in northern Mexico where co-owner Teodoro Diaz-Rodriguez grew up, opened in May 2016.  He and Jennifer Feltham run the restaurant, their first.  Chef Carlos Salgado opened Taco María in 2013 to critical acclaim, creating an Alta California cuisine that represents Mexican food by putting heritage corn at its foundation.

“Hearty congratulations to Sonoratown and Taco Maria for leading their respective categories,” said Ernest Miller, Coast Packing Corporate Chef.  “We at Coast like to think that lard is also among the winners here.  Manteca (lard) is one of the original and traditional ingredients in flour tortillas. We understand that Sonoratown thought long and hard about using lard in their tortillas and decided to do so because of its superior flavor, quality and authenticity. As we often say, ‘Lard! – Because Flavor Matters.’”

At the event, Chef Miller demonstrated to an enthusiastic crowd how to make Tortillas de Harina a Mano(homemade flour tortillas) using quality heirloom flour from Grist & Toll and Coast Packing Co.’s VIVA lard, the most popular lard in Southern California’s Hispanic market.  “There are only four ingredients in a flour tortilla — flour, water, salt and lard — so the quality of those ingredients matters,” Chef Miller said.

Gustavo, Evan and fellow KCRW’ers Nick Liao and Connie Alvarez decided the results of a competition that matched up tortillas from Riverside to Azusa, from Santa Ana to the San Fernando Valley.  The team spent the past month scouring Southern California for the best corn and flour tortillas, visiting supermarkets and mercados, restaurants and factories, new spots and places that have been around for generations, using the following criteria: does the tortilla reheat well?  Will it quesadilla?  And how does it taste?

The tournament format was straight out of a sports playoff: 32 corn, 32 flour, split into four brackets of 16 (#MasaMadness, anyone?).  Within those brackets, every tortilla was assigned a seed, ensuring that the highest-ranked tortillas went up against the lowest-ranked ones in the early rounds.