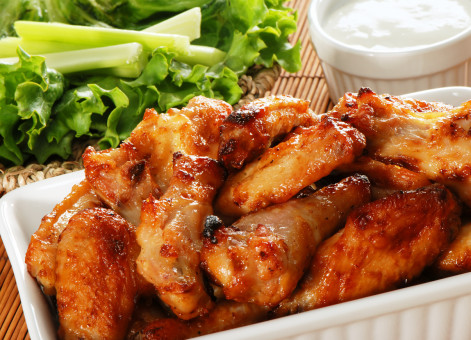 Consumed in the Billions Annually, Buffalo Creation is a Natural for Beef Tallow

VERNON, Calif. (July 28, 2018) – As a fitting follow-up to the first #NationalBeefTallowDay, Coast Packing Company, the West’s largest supplier of healthy animal fat shortenings, is lending its enthusiastic support to National Chicken Wing Day – Sunday, July 29 – and urging consumers to sample what’s been called “the most versatile protein on the planet.”

Since its inception in 1964 at the Anchor Bar in Buffalo, N.Y., the chicken wing has become a national staple.  Americans consume nearly 30 billion wings annually – about 1.3 billion on Super Bowl weekend alone.  At an average rate of 24 wings per month – 290 wings a year — that translates to 18,000 chicken wings over a typical lifespan.

In honor of National Chicken Wing Day, one popular fast casual/sports bar franchise is offering a special nationwide promotion for wing-lovers.  All day on July 29, Buffalo Wild Wings fans who dine-in will receive a free snack-sized order of wings with the purchase of any small, medium or large order of wings.

“We stand with Buffalo Wild Wings and chicken wing lovers everywhere, and we humbly suggest that chicken wings are best cooked in beef tallow,” said Eric R. Gustafson, Coast Packing CEO.  “In terms of freshness, flavor and texture, there really is no comparison to beef tallow, and we at Coast Packing are delighted consumers are increasingly recognizing that healthy animal fats like tallow are tasty, traditional and amazingly palate-pleasing.”

#NationalBeefTallowDay is the brainchild of the HFC, a group of like-minded organizations, companies and individuals that have developed a new educational initiative dedicated to the proposition that healthy fats aren’t merely having a moment – they’re here to stay, as an essential part of the American diet.  Its mission is simple: affirm that animal fats deserve a central place in the American diet and in the popular imagination.  HFC is especially committed to raising awareness about the health benefits of natural animal fats like beef tallow.