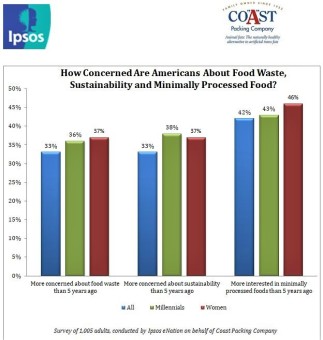 Waste not, want not. Or so the cliché goes.

But whether it’s parents admonishing children to clean their plates or commercial food enterprises extracting maximum output from the plants and animals that comprise the food supply, there’s a renewed sensitivity to issues of food waste and sustainability.

That’s the clear conclusion of a new nationwide survey from Coast Packing Company and Ipsos Research, conducted in mid-June among more than 1,000 consumers.

Each year, U.S. consumers, businesses and farms spend nearly $220 billion on food that goes uneaten, according to Food Business News. Of the 63 million tons of food wasted annually, 16 percent occurs at farms, 2 percent at manufacturers, 40 percent at consumer-facing businesses and 43 percent in consumer homes. Food waste accounts for 21 percent of all fresh water used in the U.S. and occupies 21 percent of landfill volume.

Coast Packing, the largest supplier of animal fat shortenings in the Western U.S., queried consumers on whether attitudes around food waste, sustainability and the importance of minimally processed food have changed over the last five years.

When compared with the population as a whole, younger respondents and women tended to be more concerned about sustainability, food waste and minimally processed food than they were five years ago. The overall percentages of being “more involved” in these issues were significantly higher than the incidence of being “less involved.”

Some 42 percent of the sample said they were more interested in minimally processed food today than they were five years ago. Interest in minimally processed food was highest among four demographic segments: women (46 percent), millennials (43 percent), Midwesterners (47 percent) and those with a college education (46 percent). On the issue of food waste, women, millennials and Midwesterners expressed the highest levels of concern (36 to 37 percent) vs. five years ago. In the area of sustainability, women and millennials likewise showed a similar high level of concern (37 to 38 percent).

With nose-to-tail dining growing in popularity – in part in response to concerns about food waste and sustainability – the Coast/Ipsos survey also asked consumers which parts of a cow they were open to eating: bone marrow, fat (in the form of suet or tallow), heart, kidneys, liver, sweetbreads (pancreas/thymus), testicles, tongue and tripe (stomach). Liver (27 percent) and tongue (23 percent) topped the list; sweetbreads (11 percent) and testicles (7 percent) were least popular.

According to the survey, men and college educated respondents are consistently more adventurous eaters. Perhaps not surprisingly, older folks (those 55 and above) are more open to liver than younger consumers. While a greater number of respondents indicated that they are less likely to engage in nose-to-tail consumption than those who expressed a likelihood of doing so, the various parts of the cow do have their fans, especially heart (18 percent) bone marrow (17 percent) and kidney (14 percent). Millennials and those 55+ indicated a relatively greater openness to consuming beef tallow and suet.

“As a supporter of sustainable agriculture and nose-to-tail cooking, Coast Packing ensures that no part of the animal is wasted,” said Eric R. Gustafson, CEO, Coast Packing. “Why burn more rainforest to grow palms for palm oil when we can use already available, minimally processed animal fat instead? We’re heartened by the survey’s finding that concerns about food waste and sustainability are growing, and we’re especially pleased that a substantial number of consumers are more interested in minimally processed food than was the case five years ago.”

For a copy of the survey results, please email admin@edgecommunicationsinc.com.