Whether Dining Out or Dining In, Millennials Opt for Taste and Price Over Healthy Fare, New Coast Packing/Ipsos Survey Reveals 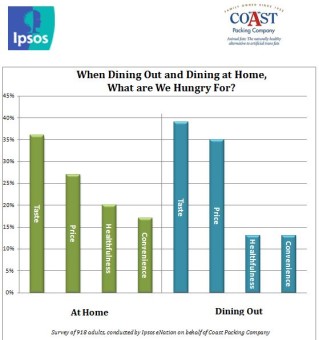 Whether Dining Out or Dining In, Millennials Opt for Taste and Price Over Healthy Fare, New Coast Packing/Ipsos Survey Reveals

At Restaurants and at Home, Younger Americans are Most Attuned to Flavor and Finances; Health Concerns Top Availability and Convenience

If millennials are America’s consummate taste-makers, a new nationwide consumer survey from Coast Packing Company and Ipsos Research confirms that taste is indeed tops for those ages 18 to 34.

Conducted in November, the study of 900+ millennials examined factors that appeal most to that demographic when dining out and when eating at home: taste, price, healthfulness and availability/convenience. Coast Packing is the number one supplier of animal fat shortenings in the Western United States.

Overall, taste is king both at home and in restaurants, cited as “most important” by 36 percent and 39 percent of respondents, respectively. Price ranks second for those dining out (35 percent) but is a bit less of a factor at home (27 percent). “Healthfulness” is a more significant consideration at home than when heading to a local eatery (20 percent to 13 percent), while convenience/availability is more of an issue at home than when dining out (17 percent to 13 percent) “Whether you’re at a restaurant or in your own kitchen, the desire for the delicious remains paramount,” said Eric R. Gustafson, CEO of Coast Packing. “Although the ‘healthfulness’ option takes a back seat to taste and price in our survey, millennials are on the record demonstrating their openness to healthy animal fats, which, of course, has everything to do with taste.”

While the message for consumers may be that millennials follow their taste buds, the takeaway for the restaurant industry is that taste just barely edged out price as most decisive. Millennials are more cost-conscious than they are health-focused when they eat out, but health concerns rise in importance when prepping food in their own kitchen.

In a recent Coast/Ipsos survey, 24 percent of millennials said they are receptive to animal fats, a substantial increase over the 15 percent who held that position a year ago. In terms of what members of the youngest demographic are actually eating, it’s a similar story: 20 percent of millennials report having increased their intake of animal fats – a hefty jump over 2015, when that figure stood at 13 percent.

According to U.S. Census Bureau data, millennials are now the nation’s largest generation and include some 75.4 million people. Forty-one percent eat out at least twice a week, compared to 37 percent of Baby Boomers and a like number of Gen Xers, per a study from foodservice research firm Technomic. Millennials spend 15 percent more of their discretionary income on experiences than other demographic groups.

Drilling Down: A Restaurant Row?
When dining out, taste matters more to women than to men (40 to 37 percent). Taste is also relatively more important to those in the Midwest than to those in other regions (43 percent, by a 4-5 point margin), those without kids at home and those with a college degree.

Price likewise matters more to women than men (39 percent to 32). Perhaps not surprisingly, those with incomes of less than $50K put the emphasis on price (40 to 32 percent, for those above that threshold). And those in the Northeast were most price-sensitive (39 percent). Forty-three percent of non-whites say price is a consideration, vs. 34 percent of whites.

At Home on the Range
When working in the kitchen, men and women are about equal in their preference for taste above all; those in the Midwest and South place relatively more emphasis on taste (39 and 38 percent, respectively – and least in the West, at 31 percent). Taste in home cooking is relatively less important to those without a college degree (34 to 38 percent), and more important to those unemployed (39 percent) than to those employed full or part-timers.

For those dining in, price is slightly more important to women and to families with children (by identical 29 percent to 26 percent margins) and most important to those in the South and West. Price matters substantially more to those without a college degree (31 to 23 percent). Those in the West are relatively more concerned about healthfulness around the dinner table (at 24 percent, by a 5 to 6 percent margin over other regions). Health likewise ranked higher for those with a college degree (23 percent to 17 percent for those without); those unemployed were relatively less concerned (15 percent) about healthfulness.

About the Survey
The Coast Packing/Ipsos study was fielded from Nov. 10-14, 2016. The Ipsos eNation survey consisted of 918 completes with adults aged 18-34 years of age in the contiguous United States. Results have a margin of error of +/- 3 percentage points. For a copy of the survey results, please email admin(at)edgecommunicationsinc(dot)com.