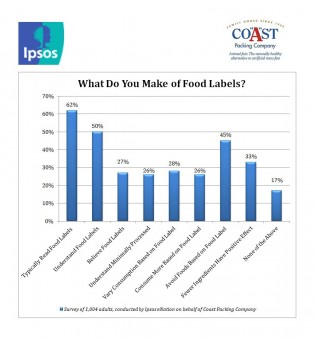 Amid U.S. Senate approval of a mandatory nationwide system for labeling genetically modified foods, a new consumer survey from Coast Packing Company and Ipsos Research finds that only half of Americans say they understand the content of food labels — and less than a third believe them.

The nationwide survey of 1,000 adults, conducted in late May, examined both awareness and behavior around food labeling, querying consumers about what they read, understand and believe – and how they act, based on that information.

The Coast/Ipsos research revealed pronounced gender and generational divides in how we respond to data conveyed on food labels. When it comes to posted ingredients, less is more both for women and millennials: 40 percent of women agreed that “a food label with fewer ingredients has a positive effect on my purchasing decision,” vs. 25 percent of men, and 33 percent of those in the 18-34 age bracket endorsed that view.

Among the study’s other topline findings:

“Food labels are intended to help us make better food choices, but they’re not working nearly as well as they should,” said Eric R. Gustafson, CEO, Coast Packing Company, the number one supplier of animal fat shortenings in the Western United States. “It’s clear from the data that Americans aren’t ignoring food labels, but a great many don’t fully understand or believe what they read.
“We come down on the side of healthy, minimally processed animal fats, which is consistent with the entire movement in food and cooking right now,” Gustafson said. “All things being equal, the fewer ingredients on the label, the closer you are to the source, the better. We’re encouraged that nearly a third of the population understands ‘minimally processed’ and values products that limit artificial ingredients – and that’s especially true for millennials.”
In late 2015, a Coast/Ipsos consumer survey found that that younger Americans are more receptive to animal fats in their diet than their elders — and are eating accordingly.
The survey of 1,000 adults examined how attitudes about animal fats in the American diet have changed in recent years – and how consumption patterns may be changing as well. Respondents were asked whether they were more or less open to animal fats, and whether those views extended to actual behavior.
In keeping with those results, The Hartman Group’s recent Foodways of the Younger Generation report found that both millennials and Gen Z (15-18) are “crafting their own food culture: Millennials begin with a foundation of childhood habits learned from their parents, and then receive unprecedented exposure to the philosophies of healthy diets throughout their years in school. Today, they are conducting their own conversations and discoveries about food through their social networks and popular media channels.”

About the Survey
The Coast Packing/Ipsos study was fielded from May 25-27, 2016. Ipsos eNation surveys consist of a minimum of 1,000 completes with adults 18 years of age or older in the contiguous United States. The sample includes individuals selected from the online segment of Ipsos’ iSay/Ampario Panel, and is balanced to be representative of the general population based upon region, gender, age, and household income data from the U.S. Census Bureau. Results have a margin of error of +/- 3 percentage points. For a copy of the survey results, please email admin@edgecommunicationsinc.com.

About Ipsos
Ipsos is a global independent market research company ranking third worldwide among research firms. The Ipsos team is passionately curious about people, markets, brands and society. Ipsos makes our changing world easier and faster to navigate, and inspires clients to make smarter decisions. The company delivers research with security, speed, simplicity and substance. Ipsos is one of the world’s largest independent market research companies, and in 2015 it celebrated its 40th anniversary.