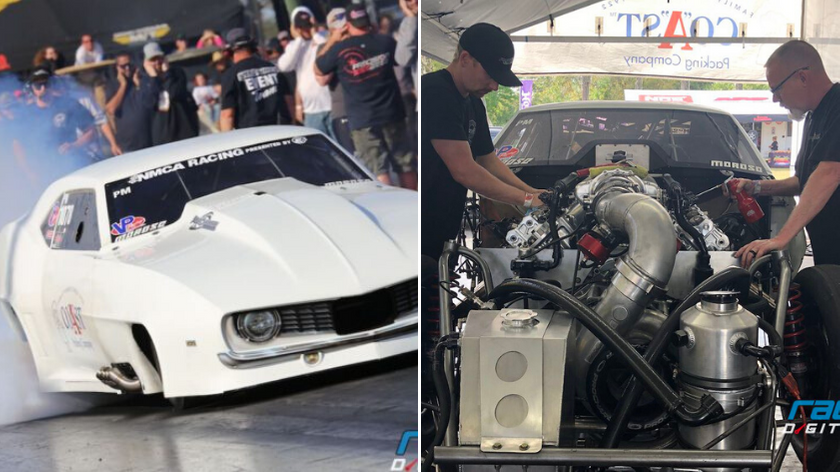 Every time Eric Gustafson rolls his race car out of trailer, fans and fellow racers know that things are going to get wicked at wide-open throttle.

He has put down plenty of power and picked up plenty of wins in his Coast Packing Camaro built by Gary Naughton Race Cars, maintained by Tim Lyons at Lyons Custom Motorsports and packing a Noonan-built Hemi fronted by a ProCharger, backed by a Liberty’s four-speed and tuned by Jason Lee and Patrick Barnhill of PTP Racing, who use a Haltech engine management system.

And, the VP Racing Lubricants Xtreme Pro Mod driver was focused on being as fierce as ever at the first race on this year’s NMCA tour, the 18th Annual NMCA Muscle Car Mayhem presented by Holbrook Racing Engines in early March at Bradenton Motorsports Park in Florida, where he flew to a 3.673 to set the pace in the cutthroat category, with Keith Haney and Randy Adler hot on his heels with a 3.69 and 3.70 respectively.

While Gustafson and his crew, including Lee, Barnhill, crew chief Cameron Hensley and Trucker John Urgo, made it appear as though there were no obstacles to overcome to that point, there were several.

“I swear, I don’t think anything is ever smooth in Pro Mod,” said Gustafson, with a laugh. “We were chasing phantom issues, and the engine was losing fuel pressure and shutting off on the big end, which can certainly cause quite a bit of engine damage. We also had a cracked header that needed to be welded, and Jamie Miller stepped in to do that for us since Tim Lyons had cars to finish for Lights Out 11 and could not be at the race. That’s just one example of the level of sportsmanship that we have in this industry.”