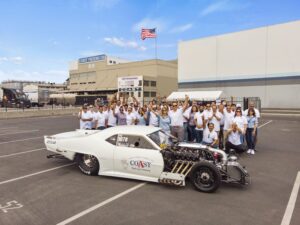 It was founded in 1922 as a livestock and meat-packing business.

There’s nothing like a summer block party to kick off a company’s next 100 years… and in Vernon last weekend, Coast Packing greeted friends and family with vivid reasons for its longevity.

Along with hundreds of employees past and present, Coast celebrated a century of transformation — and 100 years of great taste — during an afternoon dedicated to showcasing both the staying power of family leadership and the enduring appeal of food that is authentic, traditional, and just plain delicious.

With carnival games, music, and a special appearance by Coast’s 3500-hp ’69 ProCharger Pro Mod Camaro, the program for the day’s festivities paid tribute to Coast’s extended family, including City of Vernon officials and the Vernon Chamber of Commerce.

An integral part of Southern California’s restaurant, baking and food industries, Coast is the number one supplier of animal fat shortenings lard and beef tallow in the Western United States.  The company was founded in 1922 as a livestock and meat‐packing business and expanded over the years into a food‐industry leader.

“These days, it’s not that unusual for a company to hit the century mark.” says Eric R. Gustafson, Coast’s Chairman and CEO.  “People, after all, are living longer than ever.  But not that many companies connect their business trajectory to stories, personal stories, as profoundly as Coast Packing does.  Coast’s story is my family’s story and really does embody the American Dream.