City of Vernon Honors Coast Packing on Its Centennial 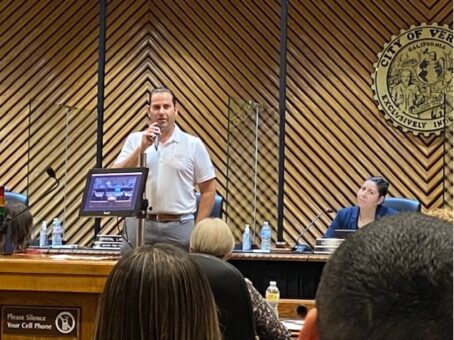 During a meeting of the City Council this week, Mayor Leticia Lopez and Mayor Pro Tem Crystal Larios formally presented Coast CEO and Chairman Eric R. Gustafson and the leadership team with a proclamation commending the company’s family and business values.

“Coast Packing’s business culture remains true to its founding values of quality, reliability, transparency, strong customer relationships and respect for its employees, customers and suppliers,” the proclamation reads.  “Coast has created countless jobs and supported the local economy and community. The company exemplifies the ‘Vernon Means Business’ motto, with its long trajectory in business, owning and operating processing facilities that comprise 100,000 square feet.  It’s an active partner of the community, engaging local organizations like the LA Regional Food Bank, the Midnight Mission and University of Southern California,” among others.

An integral part of Southern California’s restaurant, baking and food industries, Coast is the number one supplier of animal fat shortenings in the Western United States.  The company was founded in 1922 as a livestock and meat‐packing business and expanded over the years into a food‐industry powerhouse.

“We’ve been active in the Vernon business community for a century, growing and evolving in a way that now seems almost quaint,” said Gustafson, CEO, Chairman, and fourth generation member of the founding family. “My great-grandfather established the principles under which we still operate and my grandfather and father continued them – deliver the highest quality shortenings and oils, backed by superior service and unsurpassed value, and respect for our customers, employees and suppliers, all of which translates to relationships that span generations.”