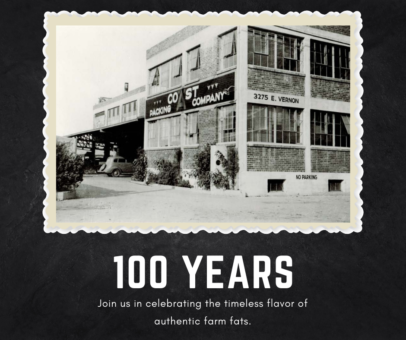 With a legacy a century in the making, Coast Packing maintains ties with its customers, partners and suppliers that are broad, deep, and go back decades.  The company was founded in 1922 as a livestock and meat‐packing business and expanded over the years into a regional food‐industry powerhouse.

“We’ve been a leader in the Southwest for a century, growing and evolving in a way that now seems almost quaint,” said Eric R. Gustafson, CEO and fourth generation member of the founding family. “My great-grandfather established the principles under which we still operate – deliver the highest quality shortenings and oils, backed by both superior service and unsurpassed value, all of which translates to customer relationships that span generations.”

Coast operated as an abattoir for more than 40 years, processing live hogs and cattle brought by railroad from the Midwest.  During those four decades, Coast Packing produced a full line of fresh pork and beef, and processed and smoked meat products, including its popular 1950s favorite brand, Ol’ Smokey.  Given its extensive ties to the meat industry, in 1962 Coast transitioned to the processing of animal and animal‐vegetable shortening products.  The company now supplies lard, beef tallow, animal-vegetable shortening blends, and vegetable oil and shortening products to the California market and well beyond.

At a time when customers frequently find themselves challenged with various supply chain issues, Coast is committed to providing product when and where customers want it.  Coast Packing’s longevity is a reflection of its culture, which places equal value on product quality and respect for customers, suppliers, and employees.

“We are truly grateful to our employees, customers, and suppliers for their support throughout the years,” Gustafson said.  “More and more consumers are seeking out food that is made with integrity and fidelity to culinary traditions.  At Coast, that reverence defines us.  After one hundred remarkable years, past truly is prologue.”

Now marking its 100th year in business, Coast Packing Company (www.coastpacking.com), a closely held corporation, is the number one supplier of animal fat shortenings – particularly lard and beef tallow — in the Western United States.  The company sells to major manufacturers, distributors, retailers, smaller food service operations and leading bakeries.  The company participates actively in diverse ethnic markets – from Hispanic retail chains, with its VIVA® brand, to various Asian specialty markets.  Based in Vernon, Calif., Coast Packing Company is regional, national and, increasingly, global.  In some cases, supplier relationships are multigenerational, extending back 50 years and more.  Coast is a founding member of the Healthy Fats Coalition.