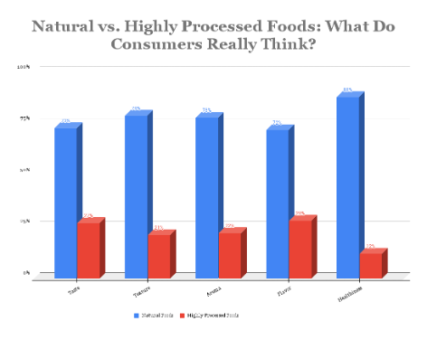 On Key Factors of Taste, Texture, Aroma, Flavor and Healthiness, Americans Across the Board Say It’s Only Natural

While meat substitutes continue to sell like hot cakes – or, more accurately, hot dogs – Americans aren’t wild about how the new crop of faux beef and pork products are manufactured – or about their similarity to the real thing.

Consumers were asked: “In thinking about the characteristics of the foods you eat, do you prefer natural foods (sourced from raw and/or animal-based ingredients, with few additives) or highly processed foods (vegetable oil-based food items like hydrogenated oils, palm oil, margarine and spreads, etc.) with regard to each of the following factors?”

Building on those results, the latest study shows that sentiment is even more clear-cut on the question of “highly processed” vs. “natural” foods.  Overall, almost two-thirds indicated that they know that plant-based meat is a highly processed food.

Among the five factors, the new study exposed a small but persistent gender divide, with women preferring natural foods by a 7-to 8-point margin in virtually every case.  Flipping that around, men were more partial to highly processed ingredients by similar margins.  On the issue of healthiness, while men and women both strongly favored natural foods over highly processed alternatives, the gap persisted (93 percent of women vs. 83 percent of men).

Viewed by region, those in the South and the West were relatively more keen on natural foods for flavor (at 74 percent, a 5 percent delta), while those ages 18-34 were more open to highly processed foods (32 percent), by nearly 10 percent, than those in other age brackets.  Consumers over 55 were least enthusiastic about highly processed foods, at just 9 percent.

“Underscoring our earlier survey, consumers increasingly get it -– they understand that highly processed foods just aren’t conducive to promoting health,” said Eric R. Gustafson, CEO, Coast Packing. “They also recognize that the trend toward plant-based meat substitutes comes at a cost – not just at the check-out counter, but in terms of how these highly processed additions to our diet are manufactured.

“By contrast, farm fats are a net positive for health and well being,” Gustafson said.   “That’s why the natural makeup of both lard and tallow matter so much.  Neither is highly processed or contains artificial trans fats found in hydrogenated shortenings.  Today’s consumers clearly value authenticity and want food that is made with integrity and respect for culinary traditions, as our latest survey demonstrates.”

In a recent study, Tufts University nutrition epidemiologist Fang Fang Zhang described as “industrial formulations” those ultra-processed foods that bear no resemblance to their original forms – foods made from byproducts of other foods, or synthesized in labs, pre-processed by molding or frying.  His research indicated that “ultraprocessed foods now comprise 2/3 of calories in children and teen diets.”

The original Coast/HFC survey coincided with release of The Power of Meat 2020 from The Food Industry Association and the North American Meat Institute (NAMI), an in-depth study of meat and poultry through shoppers’ eyes.