Trifecta Time: At Duck X Productions’ Lights Out12, Coast Packing/R&E Racing Qualifies #1, Sets World Record at 3.502 in Radial vs the World — and Wins 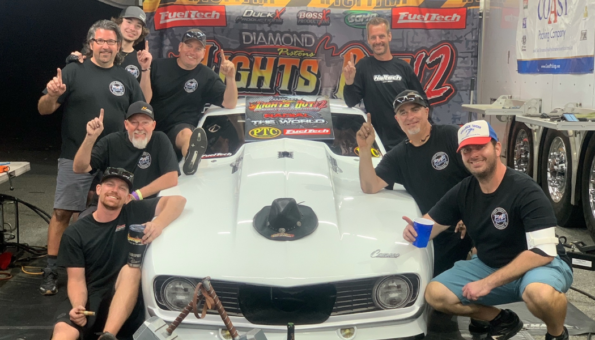 Trifecta Time: At Duck X Productions’ Lights Out12, Coast Packing/R&E Racing Qualifies #1, Sets World Record at 3.502 in Radial vs the World -- and Wins

For a while now, South Georgia Motor Sports Park (SGMP) in Adel has been very good to Coast Packing Company’s R&E Racing division.

Like last Wednesday.  As CompetitionPlus reported, “During the first qualifying session at the Lights Out 12, in the first pair down the highly-prepared South Georgia Motorsports Park, [driver Jason] Lee went to the top of the qualifying list and established the quickest mark in small tire racing with a 3.502 elapsed time at 211.46 miles per hour.  Just how stout was Lee’s first hit? Bryan Markiewicz was second quickest with a 3.567, while Marcus Birt was third with a 3.584 (https://m.youtube.com/watch?v=CFiYTTi-Ero).”  Lee shattered the record behind the wheel of R&E’s ’69 Noonan Hemi ProCharger Pro Mod Camaro.

And after that blistering, record-setting qualifying time, the Coast Packing/R&E team wrapped up the weekend with a win.  It was only the fourth Radial vs. The World event for Lee and the R&E team (http://competitionplus.com/drag-racing/news/lee-nails-new-rvw-record-to-pace-day-one-lights-out-12).

“What an unbelievable team effort!” enthused Eric R. Gustafson, R&E team owner and Coast Packing CEO.  “Whether we are racing or making the best shortenings, we always work as a team. We win as a team and lose as a team — there is no other way!