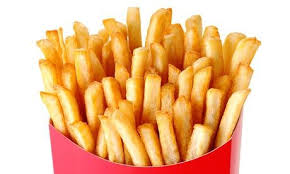 It’s for that reason and more, that we recommend our Flavor King Blue Refined Shortening. Engineered for heavy-duty deep frying, derived from select quality beef fat to maximize flavor, stability and durability, while being minimally processed. Bringing vintage goodness to fries (and more) without artificial trans fats or hydrogenated oils, Big Blue recalls the big taste consumers loved at chains in the ’70s, ’80s and ’90s.

Here’s an excerpt below from the original article, “Why McDonald’s Fries Used to Taste Better“,  by Danny Jensen via Cheapism.

In Search of Flavor

If you’re a fan of McDonald’s crisp, golden french fries, you’ve likely wondered if something changed about the flavor of those famous fries over the years — rest assured, you’re not alone in your suspicions. Over the decades, the fast-food giant has changed the oil used to cook those signature fries, often in response to public pressure for a “healthier” french fry, resulting in a product that many swear doesn’t taste quite as good as it once did (not that we’ve stopped eating them, mind you). To understand what changed, we decided to explore why McDonald’s french fries used to taste a lot better.

A Franchise Founded on Fries

To better understand how McDonald’s fries changed over the years, we have to go back to the early golden years of the Golden Arches. As much as a burger may come to mind when you think of McDonald’s, it was really the restaurant’s French fries that were the main attraction from the beginning. At their drive-in hamburger stand in San Bernardino, California, brothers Dick and Mac McDonald drew big crowds for fries, burgers, and shakes with cheap prices and quick service, beginning in 1940.

It was the restaurant’s fries, in particular, that caught the attention of Ray Kroc, who would go on to bring the McDonald’s franchise to the world. “The McDonald’s french fry was in an entirely different league,” Kroc explains in his memoir, “Grinding It Out: The Making of McDonald’s.” “They lavished attention on it. I didn’t know it then, but one day I would, too. The french fry would become almost sacrosanct for me, its preparation a ritual to be followed religiously.”

Two major factors made those original French fries irresistible: texture and tallow. Kroc realized quickly that what helped keep McDonald’s fries from getting mushy after the frying process was maintaining the right amount of moisture and starch in the fries. Even the reliable Russet Burbank potato — the large, oblong variety that McDonald’s uses to this day among others — can vary in moisture content depending on where and how it’s grown. To maintain consistency, Kroc had suppliers use hydrometers to ensure optimal moisture content.

Kroc also found that curing the potatoes — storing them in warm temperatures for a few weeks — helped convert the sugars in a fresh potato into starch, which made for a crisper fry that didn’t caramelize and brown. He also hired an electrical engineer named Louis Martino to develop a “potato computer” to determine the optimal cooking time for the fries. But it was the beef tallow used to cook the fries that ultimately made them a worldwide hit.

The Flavor Secrets of Formula 47

It was beef tallow — the rendered form of beef fat that’s solid at room temperature — that gave McDonald’s fries their signature rich and buttery flavor. But the tallow was used initially because it was the cheap, convenient option. Interstate, the fry oil supplier for the McDonald brothers’ burger stand, was too small of an operation to afford the expensive hydrogenation equipment to produce partially hydrogenated vegetable oil — the most popular frying oil at the time. Instead, Interstate provided McDonald’s with a blend of 7% vegetable oil and 93% beef tallow, sourced from the stockyards of Chicago, which could extend the life of the oil without expensive equipment. It also happened to make the fries incredibly delicious.

The special beef tallow and oil blend for McDonald’s fries became known as Formula 47, named after the combined cost of the restaurant’s “All-American meal” at the time, which included a 15-cent burger, 12-cent fries, and a 20-cent shake. Kroc insisted that all of the McDonald’s franchises use Formula 47, ensuring that the rest of the country — and eventually the world — would come to love the taste of McDonald’s french fries.

In his memoir, Kroc explains how important those fries were to the success of McDonald’s, “One of my suppliers told me ‘Ray, you know you aren’t in the hamburger business at all. You’re in the french-fry business. I don’t know how the livin’ hell you do it, but you’ve got the best french fries in town, and that’s what’s selling folks on your place.'” He goes on to say, “The quality of our french fries was a large part of McDonald’s success.”