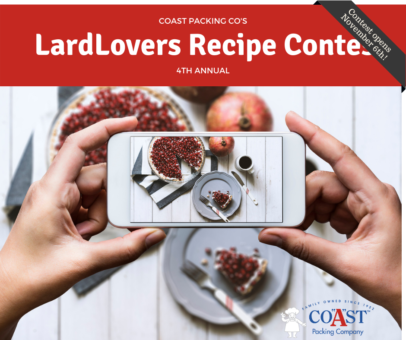 Proving that there’s nothing like those classic family recipes to bring kitchens and home cooks to life, Coast Packing Company, the West’s largest supplier of animal fat shortenings, today announced the fourth annual #LardLovers Recipe Contest — with a nod to a renewed, widespread appreciation of comfort food.

Acknowledging the impact of COVID-19 on the food scene this year, Coast is asking contestants so inclined to write in 25 words or less how the pandemic has affected their appreciation of comfort food and their willingness to experiment with ingredients from days of yore.  Judging will not address commentary on the pandemic.

Contest entries will be accepted online starting on Friday, Nov. 6, at midnight Pacific time.  All entries must be received by midnight Friday, Nov. 27.  To enter, contestants can use the online form posted at https://www.coastpacking.com/lardlovers.  Alternatively, entries can be submitted via Facebook.   The contest is open to those 21 and over, and no purchase is necessary to enter.

All submissions will be posted on the Coast Packing website, ideally accompanied by images of the resulting dishes. Reprising last year’s successful format, Coast’s judging panel will enlist Melissa’s/World Variety Produce, Inc.  of Vernon — the largest distributor of specialty produce in the United States — to prepare and assess the top recipes.  Coast Corporate Chef Rolando Rubalcava will join Melissa’s Corporate Chef Miki Hackney in judging contest entries.  Winners will be chosen based on flavor, creativity/originality and visual appeal.

The lineup of prizes:

Winners will be announced on December 8, National Lard Day.  #NationalLardDay is a celebration of a traditional, flavorful animal fat – pure lard, derived from pork – that is now enjoying a resurgence within America’s food culture, in restaurants (especially those featuring ethnic specialties), fast food operations and home kitchens.  Artificial trans fats are out, and minimally processed animal fats like lard — for superior baking, frying and a host of other cooking applications – are making a comeback.

“Timed with National Lard Day, we at Coast are delighted to sponsor the fourth #LardLovers Contest,” said Eric R. Gustafson, Coast Packing CEO. “The color, texture and flavor that lard imparts make it a vastly superior alternative to heavily processed, industrially-produced cooking oils.  Lard is the once and future king of the kitchen, the one ingredient that never fails to speak ‘flavor,’ even as it brings out the best in everything it touches.

“There’s a reason certain ingredients are traditional — they provide better taste than the non-traditional alternatives,” Gustafson said.  “On National Lard Day, taste the difference yourself!  It’s even better if you can do so from the comfort of your own kitchen, so break out that secret family recipe and join the #LardLovers Contest.  And this year, we’d especially love for you to share your thoughts on how the pandemic has affected your use of this authentic farm fat.  To all who participate – and with a special shout-out to Melissa’s and to Chef Rolando — thanks for joining us in praising the lard.”