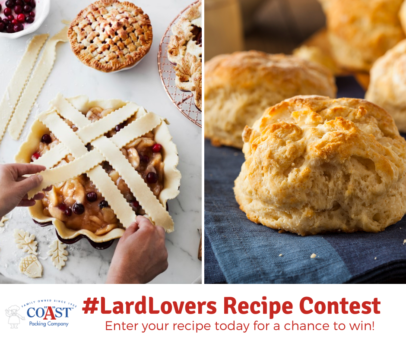 While comfort food never really goes out of style, it’s enjoying a remarkable resurgence this holiday season, as contestants in Coast Packing Company’s Fourth Annual #LardLovers Recipe Contest open their kitchens to classic dishes that set a special tone – and taste – during an unprecedented time.

Contest entries have been accepted online since Nov. 6 and must be received by midnight next Friday, Nov. 27.  To enter, contestants can use the online form posted at https://www.coastpacking.com/lardlovers.  Alternatively, entries can be submitted via Facebook.   The contest is open to those 21 and over, and no purchase is necessary to enter.

Acknowledging the impact of COVID-19 on the food scene this year, Coast asked contestants to write in 25 words or less how the pandemic has affected their willingness to experiment with ingredients from days of yore – and they have responded accordingly:

“I am baking more now that we are home more,” wrote Nicole Herman of Torrington, Conn.

“Our family has always used lard, and during the pandemic we’ve always kept it on hand because it’s so versatile,” said Amy Bizzarri of Chicago. “Since [lard] doesn’t smoke at high temperatures, it’s perfect for high heat cooking.  Plus, it has less saturated fat than butter!”

“I grew up on a farm way out in the country in northwest Ohio,” Jayne Homsher of Cincinnati recalled. “My parents raised our livestock from cattle, cows, hogs and chickens both laying and broilers.  We had a huge garden and orchard as well as berries of all sorts.  I am spoiled by good food!”

“To be honest, I usually use olive oil but there was a major shortage of any kind of oil due to the pandemic,” wrote Anh Nguyen of San Diego. “My sister suggested that I try lard for all my cooking and baking needs. I loved it and will never look back. It’s the best decision ever!”

Recipe submissions have been posted on the Coast Packing website, and many are accompanied by images of the resulting dishes.  To prepare and assess the top recipes, Coast’s judging panel includes Corporate Chef Miki Hackney from Melissa’s/World Variety Produce, Inc.  of Vernon — the largest distributor of specialty produce in the United States –and Coast Corporate Chef Rolando Rubalcava.  Winners will be chosen based on flavor, creativity/originality and visual appeal.  Judging will not address commentary on the pandemic.  The lineup of prizes:

Winners will be announced on December 8, National Lard Day.  #NationalLardDay is a celebration of a traditional, flavorful animal fat – pure lard, derived from pork – that is now enjoying a resurgence within America’s food culture, in restaurants (especially those featuring ethnic specialties), fast food operations and home kitchens.  Artificial trans fats are out, and minimally processed animal fats like lard — for superior baking, frying and a host of other cooking applications – are making a comeback.