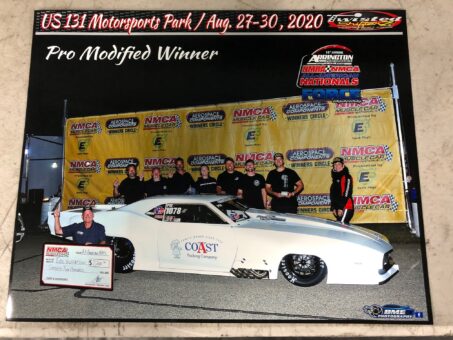 There’s no place like Motor City to demonstrate just what a smoking internal combustion engine can do in an eighth of a mile – just ask Coast Packing Company CEO Eric R. “Goose” Gustafson, who on Sunday powered his ’69 Noonan Hemi ProCharger Pro Mod Camaro to a blistering #1 finish in the Arrington Performance NMRA/NMCA All-American Nationals presented by Force Engineering, at U.S. 131 Motorsports Park in Martin, Michigan.

“VP Racing Lubricants Xtreme Pro Mod racers were in rocket-mode, with seven of eighteen of them running 3.70s in qualifying, and others right there with 3.80s and 3.90s,” Drag Illustrated wrote. “Jim Widener set the pace for the second race in a row with a 3.70, but it was Eric Gustafson and Adam Flamholc who were pulling into the waterbox for the highly anticipated final round of eliminations. They leaped off the line with nearly identical reaction times, and it was anybody’s race until Flamholc was forced to pedal it and Gustafson went on to a 3.70 to win.” “I’d have to say it’s our most complete team win,” Gustafson enthused.  “With the exception of a few challenges, when it mattered everyone was on their ‘A’ game… even the driver!  I am so proud of our team and their ‘never quit’ attitude and execution. Thank you to our sponsors and employees at Coast Packing.  This was a huge win and it helps to add to our points lead in the championship race!”

As it has all season long, the crew of Cameron Hensley, John Urgo, Jason Lee, Patrick Barnhill, Tim Lyons and the team at Lyons Custom Motorsports helped make the magic happen.  In addition, a couple of old faces — Nick “Dumbo” Strohbeen and Ben Liedel — returned to support the R&E Racing/Coast Packing team.

While the pandemic limited fan attendance, the field of racers was anything but limited, with more than 650 racers rolling in.  “It’s a record-setting and remarkable number that included a perfect mix of series regulars and series rookies ready to put it all on the line at the facility whose slogan is ‘The Fastest Track in Michigan,’” Drag Illustrated reported.  “They prevailed over heat, humidity, rain and raucous thunder early in the weekend to heap on the horsepower when cool and crisp air came later in the weekend.”