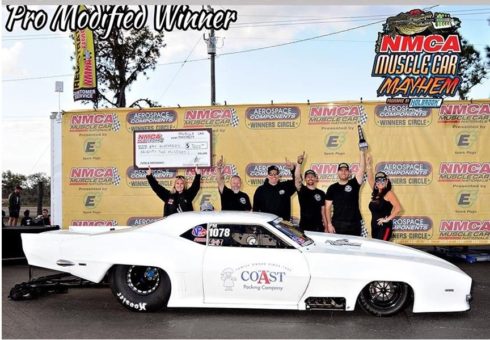 Mary Lendzion, writing in NMCA Digital, said this: “In VP Racing Lubricants Xtreme Pro Mod, the majority of drivers dished out 3.60s and 3.70s in qualifying, but Eric Gustafson outgunned the group with a 3.67 in his PTP-tuned Coast Packing Camaro to set the pace. The Californian cruised all the way to the final, where he clocked a 3.68 to win over Andrew Handras, who went into a wheelie and was forced to lift to a 4.09 in his Camaro.”

“It was a spectacular weekend and truly a team effort,” Gustafson said, reflecting on a topsy-turvy race event.  “We could not do this without the support of our team — Cameron Hensley, John Urgo, Jason Lee, Patrick Barnhill, Tim Lyons and the team at Lyons Custom Motorsports, and last but not least, all of our employees at Coast Packing Company.  We had to change motors, rewire the car and still had the good fortune to win the race.”

The first event of the year, the NMCA Muscle Car Nationals Series rolled through Bradenton Motorsports Park with the NMCA Muscle Car Mayhem presented by Holbrook Racing Engines.  The event featured one of the season’s largest turnouts, with racers showing up to compete in each of the NMCA’s eleven classes, plus a large contingent of True Street, Modern Hemi, LS/LT, and bracket racers.