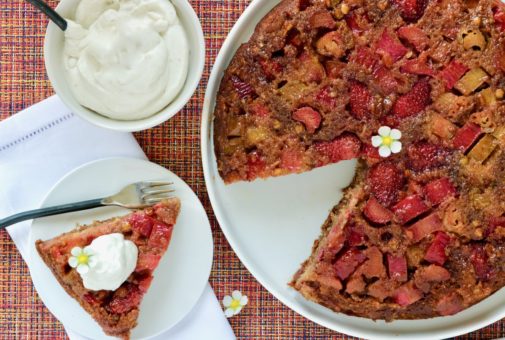 This Strawberry Rhubarb Skillet Cake recipe, submitted by Lisa Keys of Kennett Square, Penn. took second place in our 3rd Annual #LardLovers Recipe Contest. The contest drew homegrown recipes — savory and sweet alike — from around the country. Her winning cake has a nice overall balance of sweet and tart. It is easy to make with readily accessible ingredients. And it can be made with or without a cast iron pan and still achieve great results!

Heat oven to 350F. In a 10-inch oven-safe skillet (I use cast iron), over low heat, melt ¼ cup of lard. Add ½ cup of brown sugar and ½ teaspoon of cinnamon; mix and spread evenly over the bottom of the skillet. Remove from heat. Place 5 strawberry halves, cut side up, around the center of the skillet. Place remaining strawberry halves around them toward the edge of the skillet. Sprinkle rhubarb evenly over the skillet. In large bowl, combine all-purpose flour, oats, sugar, baking soda, salt and remaining ½ cup brown sugar and 1 teaspoon of cinnamon; blend well. Melt remaining ¼ cup of lard and add it along with the buttermilk, egg and ½ teaspoon of vanilla to dry ingredients. Combine the wet and dry ingredients with an electric mixture until well mixed. Pour and spread batter evenly over fruit in skillet. Bake for 45 to 50 minutes or until wooden pick inserted in center comes out clean. If cake is getting too brown then cover loosely with foil during last 5 minutes of baking time. Cool cake for 5 minutes before running a knife around the edge and then inverting onto a serving plate. Serve warm with sweetened whipped cream. Garnish as desired.