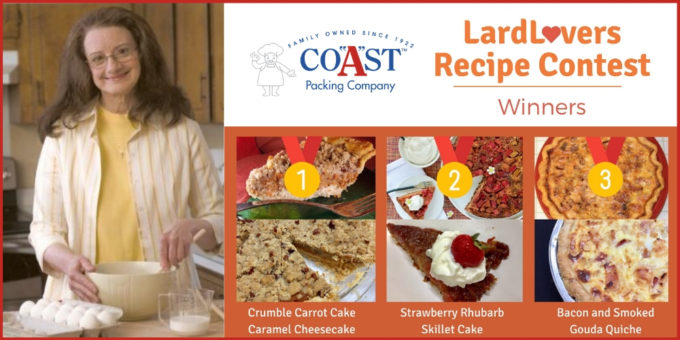 For the ingenuity behind her submission — Crumble Carrot Cake Caramel Cheesecake — Brenda will take home the top prize, a KitchenAid® Metallic Series 5-Qt. Stand Mixer in Satin Copper, with an estimated retail value of $629.95. Lisa Keys of Kennett Square, Penn. claimed second prize with her Strawberry Rhubarb Skillet Cake and is now the proud owner of a Le Creuset 6 Piece Flame Stoneware Heritage Bakeware Set, with an estimated retail value $271.99.

Third prize went to Kellie Braddell of West Point, Calif., whose recipe for Bacon and Smoked Gouda Quiche impressed the judges and secured for her an Olivewood Pastry Tools, Set of 5, with an estimated retail value $79.95.

Attesting to the growing popularity of authentic animal fats, this year’s #LardLovers contest attracted a record number of entries. In November, Coast issued a call for any unique, unpublished recipe that uses lard. All submissions were posted on the Coast Packing website, accompanied by images of the resulting dishes.  In a first this year, the seven-member judging panel prepared the top recipes at Melissa’s/World Variety Produce, Inc. of Vernon, the largest distributor of specialty produce in the United States.  Under the direction of Miki Hackney, Melissa’s Corporate Chef, winners were chosen based on flavor, creativity/originality and visual appeal.

Of Brenda’s cheesecake, judges said this:  “Nice combination of sweet and savory; nice looking pie and crust.” “Not your typical cheesecake.” “Clean flavors; not sweet as a cheesecake dessert, not too heavy, either.”

Lisa’s Strawberry Rhubarb Skillet Cake drew these reactions, among others: “Easy to make, reasonably accessible ingredients, can be made with or without a cast iron pan and still achieve great results.” “Nice overall balance of sweet and tart.”

And judges offered these observations about Kellie’s quiche:  “Savory, flavorful, flakey crust… didn’t seem ‘fatty’ for the amount of overall fat in the recipe.” “Liked the addition of bay leaf.”  “Gave the dish that something ‘extra.’ Different in a good way.”

Rounding out the list of top 10 recipes and finalists:

Observed officially for the first time last year, #NationalLardDay, December 8, is a celebration of a traditional, flavorful animal fat – pure lard, derived from pork – that is now enjoying a resurgence within America’s food culture, in restaurants (especially those featuring ethnic specialties), fast food operations and home kitchens.  Artificial trans fats are out, and minimally processed animal fats like lard — for superior baking, frying and a host of other cooking applications – are making a comeback.

“Our congratulations to Brenda, Lisa and Kellie -– they showed, in the most delicious way possible, why we encourage everyone to taste the difference between authentic animal fats and their processed alternatives,” said Eric R. Gustafson, Coast Packing CEO. “We at Coast extend our appreciation to the other finalists and to everyone who responded with imaginative recipes, whether savory or sweet.  Lard is the one ingredient that never fails to speak ‘flavor,’ even as it brings out the best in everything it touches. In this year’s #LardLovers Contest, everybody wins.”