In Coast Packing’s Second Annual #LardLovers Recipe Contest, The Sweets Have It; Muffins, Pie and Cookies Take the Cake 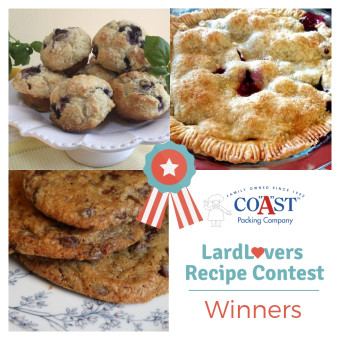 In Coast Packing’s Second Annual #LardLovers Recipe Contest, The Sweets Have It; Muffins, Pie and Cookies Take the Cake

Nothing could be sweeter than homemade desserts prepared with lard – especially when they’re enjoyed on #NationalLardDay.

That’s the consensus takeaway of the Second Annual #LardLovers Recipe Contest, organized by Coast Packing Company, the West’s largest supplier of healthy animal fat shortenings.  The month-long contest drew homegrown recipes — savory and sweet alike — from around the country, as well as feedback from the social media community throughout November.

The #LardLovers Contestis Coast Packing’s annual showcase of “the one ingredient that never fails to speak ‘flavor,’ even as it brings out the best in everything it touches,” according to  Eric R. Gustafson, Coast CEO.  “Lard is traditional, authentic and true to its roots and culture. There’sa reason certain ingredients are traditional — they provide better taste and quality than the non-traditional alternatives.  Coast Packing knows (as do so many home cooks) that lard is what makes dishes from pie crusts to breads and cookies, from fried chicken to tamales, fantastically flavorful.”

Observed officially for the first time this year, #NationalLardDay, December 8, is a celebration of a traditional healthy animal fat – pure lard, derived from pork – that is now enjoying a resurgence within America’s food culture, in restaurants (especially those featuring ethnic specialties), fast food operations and home kitchens.  Artificial trans fats are out, and minimally processed animal fats like lard — for superior baking, frying and a host of other cooking applications – are making a comeback.   #NationalLardDay is an initiative of the Healthy Fats Coalition.

Fans on Facebook, Instagram and Twitter helped choose this year top entries by voting for their favorites among the individual recipes, accompanied by images of the resulting dishes.  The top 10 vote-getters were posted on the Coast site.  Coast’s judges subsequently prepared those recipes and selected three winners based on flavor, creativity/originality and visual appeal.

Rounding out the Top 10 recipes:

Judges had this to say, in part, about the finalists: