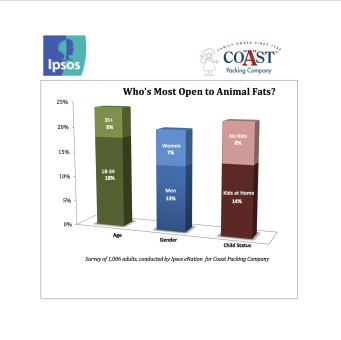 “Fat is a necessary part of a diet.” “Animal fats are better for you than synthetic fat.” “Humans evolved to eat animal fats.”

So say respondents in the fourth annual Coast Packing Company/Ipsos Animal Fats Study, examining openness to, and consumption of, animal fats.  Among the findings in this latest iteration of the consumer survey from Ipsos Research and Coast, the number one supplier of animal fat shortenings in the Western United States: consumers recognize that not all fats are created equal or play an identical role in a balanced diet.

As in the original baseline study, conducted in November 2015, the 2018 edition polled 1,000 adults nationwide on their attitudes and consumption patterns around animal fats.  Respondents were asked whether they were more or less open to animal fats, and whether those views extended to actual behavior.  New this year was a question aimed at eliciting verbatim responses from a subset of the sample: “Why are you more open to animal fats in your diet?”

Verbatim feedback, which skewed toward men and younger respondents, revealed a range of insights about increased openness to animal fats:

“As the latest Coast/Ipsos survey shows, consumers increasingly get it – they understand that animal fats are a net positive for health and well being,”said Eric R. Gustafson, CEO, Coast Packing.  “We were especially pleased by the insights and thoughtfulness expressed in the verbatim responses.  Today’s consumers clearly value authenticity and want food that is made with integrity and respect for culinary traditions.  That’s why the natural makeup of both lard and tallow matter so much. Neither contains the artificial trans fats found in hydrogenated shortenings.  These products are best when minimally processed, which is consistent with the entire thrust of food and cooking right now.”

Foodies have been signaling as much all year.  According to Fine Dining Loversin its report, “12 Food Industry Trends for 2018”, “It seems Deep Fried is making a big come back for 2018.”   Nodding in agreement is LoveFood.com, which includes lard among the “24 Foods You Need to Try in 2018”.  Or, as forecasters predicted at “The Next Big Bite” event, held in New York on October 1, “[in the coming year], lard and cooking with real fat will get new respect.”