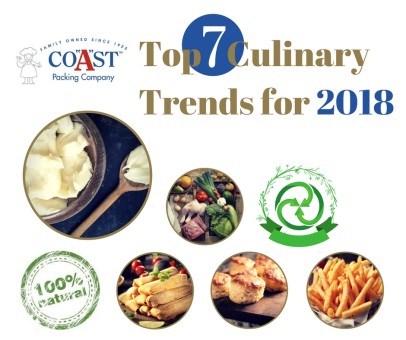 Tradition is trendy, so in 2018, look for the heritage cooking fats pork lard and beef tallow to accelerate their comeback in both restaurants and home kitchens – so says Ernest Miller, Corporate Chef for Coast Packing Company, the West’s largest supplier of healthy animal fat shortenings.

According to Miller, a number of larger trends are coming together to make natural animal fats the next hot ingredient:

Chef Miller, who has been called “the Huell Howser of California food,” is a chef, historian, educator, consultant and speaker – a familiar presence in museums, schools and kitchens throughout Southern California. He is a member of the speakers’ bureau for the Culinary Historians of Southern California and lecturer for the National Food and Beverage Foundation. Miller, formerly a chef instructor for Le Cordon Bleu Los Angeles, was educated at the United States Naval Academy and Yale Law School.