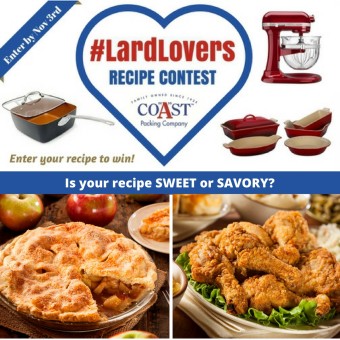 With Kitchen Bling Hanging in the Balance, Home Cooks Have Until Nov. 3 to Submit; Top-Flight Panel of Judges Poised to Put Concoctions to the (Taste) Test

Coast Packing, the West’s largest supplier of healthy animal fat shortenings, knows (as do so many home cooks) that lard is what makes dishes from pie crusts to breads and cookies, from fried chicken to tamales, fantastically flavorful.

Contest entries will be accepted online through midnight Friday, November 3. To enter, contestants can use the online form posted at http://coastpacking.com/lardlovers/. Alternatively, entries can be submitted via Facebook: https://goo.gl/qCigJg.

“Lard is the one ingredient that never fails to speak ‘flavor,’ even as it brings out the best in everything it touches,” said Ernest Miller, Coast’s Corporate Chef. “Lard is traditional, authentic and true to its roots and culture. There’s a reason certain ingredients are traditional — they provide better taste and quality than the non-traditional alternatives.”

Winners will be announced on December 8, the first (unofficial) National Lard Day. The first official observance is set for December 8, 2018, according to Chase’s Calendar of Events. The contest is open to those 21 and over, and no purchase is necessary to enter.

Members of the Coast Packing Co. staff will determine the finalists in each category. Recipe finalists will be determined based on creativity, visual appeal and ease of execution (how easy is this recipe to make by the average home cook). Recipes determined to be finalists will be prepared (cooked) by Coast Packing Co. staff. The top three winning recipes in each category will then be determined by the panel of food journalists based on creativity, visual appeal and flavor.