Home > Coast Blog > Press > News Releases > At the Orange County Fair, They ‘Tasted the Difference’ – And Beef Tallow Fries Came Up the Winner

At the Orange County Fair, They ‘Tasted the Difference’ – And Beef Tallow Fries Came Up the Winner 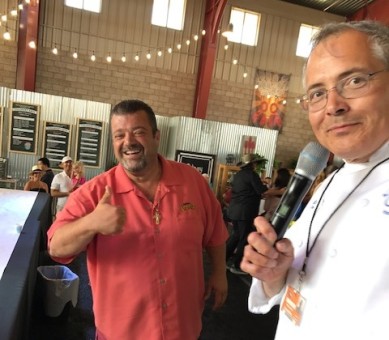 At the Orange County Fair, They ‘Tasted the Difference’ – And Beef Tallow Fries Came Up the Winner

The people have spoken. Beef tallow really is the way to a better French fry.

More than 120 fairgoers enjoying a day of “Farm Fresh Fun” had an opportunity to literally taste the difference between Burbank russet potatoes cooked the old-fashioned way – in beef fat (technically, beef tallow) – versus vegetable oil, as Chicken Charlie fried up the two varieties for blind taste-testings on-stage in the Culinary Arts building. Consumers cast ballots for the fries with the best flavor, texture and color, to determine what constitutes “French Fries Fried Right.”

“County fairs showcase fried food better than just about any place, and fairgoers are experienced evaluators of deep fried foods,” said Pamela Wnuck, Culinary Supervisor for the Orange County Fair. “We were delighted to host this delicious fry-off and provide a fun, hands-on opportunity for fairgoers to express their passion for all things fried.”

And thus, with fairgoers’ palates attuned to deep fried excellence, by a vote of 71 to 57, the classic flavor of beef tallow-fried spuds emerged as the popular favorite.

“At this challenge, taste buds had their say – and beef tallow carried the day,” said Ernest Miller, Coast Packing’s Corporate Chef and emcee for the taste-off.

Authentic, traditional and pure animal fat shortenings are now undergoing a resurgence within America’s food culture, in restaurants, fast food operations and kitchens. Artificial trans fats are out, and natural, minimally processed animal fats like beef tallow are in. Animal fat shortenings are enjoying a renaissance not only because they’re natural and traditional, but because of their superior quality. The color, texture and umami that beef tallow imparts to fried foods make it a vastly superior alternative to heavily processed, industrially produced substitutes.