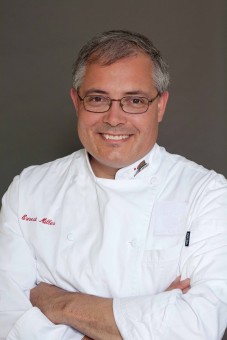 Stepping up its effort to educate consumers and the market at large about the merits of minimally processed animal fats like lard and beef tallow, Coast Packing Company has named longtime Southern California chef/educator Ernest Miller its first Corporate Chef.

Miller, who has been called “the Huell Howser of California food,” is a chef, historian, educator, consultant and speaker – a familiar presence in museums, schools and kitchens throughout Southern California. He is the co-leader of Slow Food Los Angeles, a member of the speakers’ bureau for the Culinary Historians of Southern California, lecturer for the National Food and Beverage Foundation, director of Slow Food Preservers of Los Angeles County and founder of Rancho La Merced Provisions LLC, a manufacturer of fermentation kits. Miller, formerly a chef instructor for Le Cordon Bleu Los Angeles, was educated at the United States Naval Academy and Yale Law School.

As Coast’s Corporate Chef, Miller will help establish the company’s new test kitchen, create recipes original to Coast, compile farm-to-table cookbooks, develop tutorials around cooking with lard and beef tallow, speak at consumer and industry events, and contribute to Coast’s leadership within the Healthy Fats Coalition, among other initiatives.

“Food is never just food – it always has a narrative,” Miller said. “The more you know the history and story of food, the better it tastes. It’s clear that minimally processed animal fats are again growing in popularity, not only because they make food taste better and promote health, but because they are part of our shared cultural heritage. That’s at the heart of the story Coast is telling, and I’m thrilled to be a part of the team with such a long history in Southern California and is engaging with consumers and the food industry to bring that story home.”

“Ernie Miller’s passion for history and for food is nothing short of inspiring,” said Eric R. Gustafson, CEO of Coast Packing, the leading supplier of animal fat shortenings in the Western U.S. “Throughout his career, Ernie has sought to feed both body and soul with food and classes that reflect the rich history of California. Coast is fortunate to have him in the new position of Corporate Chef, where he’ll be reaching out to all of Coast’s audiences, from millennials to major chains to ethnic specialty restaurants and foodie havens.”