Americans Are Eating More Butter Than Ever 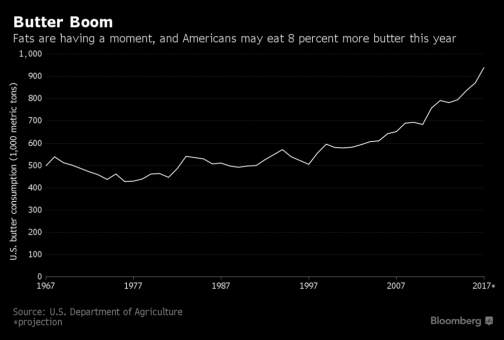 Hipsters are dropping it into cocktails and coffee. A major food distributor is packing it into a trendy new pastry. Bob Evans Farms Inc. is slipping it into waffles and McDonald’s Corp. onto its signature muffins.

What’s this new craze? It’s none other than your grandparents’ standby, butter. Yes, butter, it turns out, is having a moment. Americans are forecast to eat a whopping 8 percent more of the stuff than last year, reaching 940,000 metric tons, almost the weight of three Empire State Buildings. That’s the most since at least 1967, Department of Agriculture data shows.

Once reviled as public-health enemy No. 1, butter is now being pitched as a more wholesome alternative to margarine and transfats. It helps that dietary experts are now training their sights on the evils of sugar, shifting the spotlight away from butter’s artery-clogging glory.

“It has this umami quality to it where your mouth just waters, and you want to keep shoving it into your face,” said Rick Gresh, director of U.S. culinary operations for AceBounce in Chicago, a restaurant that will be selling the pastry in June.