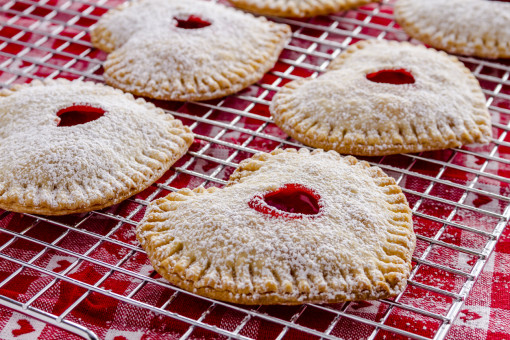 With only a few shopping weeks left until Valentine’s Day, Coast Packing Company — the leading supplier of animal fat shortenings in the Western U.S. – has lined up a trio of must-make recipes that practically sing “kiss the cook.”

“For the second year running, we at Coast are delighted to offer couples three recipes guaranteed to make the Valentine’s Day kitchen a truly happy place,” said Eric R. Gustafson, CEO of the 95-year-old company.

“Whether you use lard or beef tallow, that someone in your life is certain to taste the difference. Savvy consumers steer clear of industrially-produced partially hydrogenated fats in favor of healthy animal fats, which have the benefit of being consistently delicious, minimally processed and good for you.”

With appreciation to keyingredient.com, thedeerslayerswife.com and hereweare.com, Coast joins with Cupid in wishing all a lovely holiday. The recipes follow:

Directions
1. Preheat oven to 350 degrees.
2. Cream lard and sugar together in stand mixer, until light and fluffy. With mixer running, add eggs 1 at a time, incorporating fully before adding next egg.
3. In a separate bowl, whisk together flour and baking powder. Add flour mixture and buttermilk in alternating batches to the stand mixer, beginning and ending with dry flour mix.
4. Spoon cake batter into half-pint Mason jelly jars and transfer to baking sheet. Bake for 30 minutes or until toothpick comes out clean.
5. While cake is baking, prepare the strawberries. Toss with olive oil and place over a grill on high heat. Turn strawberries frequently until they are softened and lightly charred on all sides, about 3 minutes.
6. Put cream and honey into stand mixer and cream together until soft peaks form.
7. When cakes are done and cool, spoon the cream over top and divide strawberries among the jars.

Directions
For the crust:
Combine the flour and salt in a large bowl. Using a pastry blender, two butter knives, or your fingers, cut in the lard until the mixture is a very fine crumble. Sprinkle the cold water over the mixture and combine just until the mixture sticks together. Divide the dough in half. Form into 2 balls. Wrap each ball in plastic wrap and refrigerate for about 30 minutes. Prepare a work surface by sprinkling with flour, and roll out into two discs to fit your pie plate. Preheat the oven to 375 degrees F.

For the filling:
Pour cherries in a medium saucepan and place over medium heat. Cover. After the cherries lose considerable juice, which may take a few minutes, remove from heat. In a small bowl, mix the sugar and cornstarch together. Pour this mixture into the hot cherries and mix well. Add zest and mix. Return the mixture to the stove and cook over low heat until thickened, stirring frequently. Remove from the heat and let cool. If the filling is too thick, add a little reserved water, too thin, add a little more cornstarch.

Pour cooled cherry mixture into the crust. Dot with butter. Moisten edge of bottom crust. Place top crust on and flute the edge of the pie. Make a slit in the middle of the crust for steam to escape. Brush with egg. Sprinkle crust with sugar.

Place pie on a cookie sheet in case of bubbling over. Bake for about 50 minutes. Remove from the oven and place on a rack to cool.

Ingredients
o 1 sirloin or rump (or other steak with a nice amount of fat) per person
o 2 tablespoons unsalted butter or ghee
o Fresh ground pepper
o Sea salt
o 1 large baking potato per person
o Beef tallow or lard, for deep-frying (here’s why you want to use it, too – besides being delicious)
o A grill pan, a pot for frying, paper towels, and a candy thermometer

Directions
1. Peel the potatoes and slice lengthwise into 1/4 inch thick sticks. Soak in a bowl of cold water for 15 minutes.
2. In a deep-fryer or a pot, heat 3 inches of lard or tallow to 325°. Drain the potatoes and dry them well on a clean kitchen towel. Divide the potatoes into batches (1 potato per batch) and fry each batch until they begin to look just slightly golden, about 5 minutes. Using a slotted spoon, transfer the fried potatoes to paper towels to drain.
3. Put the grill pan over medium-high heat. Season the steaks with salt and pepper, and melt some butter in the pan. When it’s really hot, put your steaks on. (Only two at a time, or else it will drop the temperature too much.) Don’t move them around, just let them sit there, for about 5 minutes for 1-inch thick. Flip and cook for another 4 minutes for medium-rare. I take the time to also sear the fat cap on one side of the steak– I just hold it on its side with tongs until the fat is golden and tasty-looking.
4. Reheat the frying fat to 375°. This is the part where you get the outsides of the fries nice and crispy. Fry the potatoes until golden brown, 1 to 2 minutes per batch. Using a slotted spoon, transfer the frites to fresh paper towels to drain. They should finish about the same time as the steaks. If they are done a little earlier, then just put them on a pan in a hot oven (400º F) until you are ready to serve them. Don’t forget to salt them.