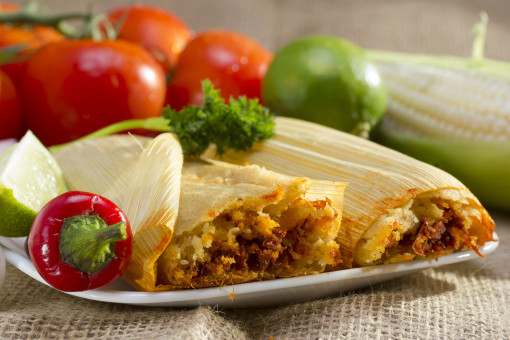 Holiday time is tamale time, and Coast Packing Company — the leading supplier of animal fat shortenings in the Western U.S. — is offering recipes for this popular dish that are sure to make a lard lover of anyone passing through the kitchen.

“Preparing and serving tamales at Christmas time is a wonderful family tradition,” said Eric R. Gustafson, CEO of the 95-year-old company and an advocate of healthy animal fats in the American diet.  “Lard is making a comeback in so many foods, but where tamales are concerned, it’s never left. Lard is one of those minimally processed animal fats that makes food taste better and, unlike industrially-produced partially hydrogenated fats, promotes health.”

Coast wishes everyone a very happy holiday season and extends its thanks to Maria Salazar (www.deliciousdays.com), SeriousEats.com — and El Aviso Magazine contributing writer Kathy Jurado, for a bonus, family-tested way to make tortillas.  The recipes follow:

This master dough recipe for Mexican tamales starts with either fresh masa — the nixtamalized corn dough used to make tamales and tortillas — from a tortilleria or masa harina, nixtamailzed corn flour that’s reconstituted with water or stock.  Then, lard, baking powder, and chicken stock are beaten into it to create a light, tender, and flavorful tamale that can be stuffed with your favorite filling, like green chili and pork, rajas and queso, or red chili with chicken.  You’ll want to have an electric mixer handy.  Note that:

Some people use a bread mixer, but my mother (and all her daughters) uses hands and muscles.  Kneading the masa is great for your arms and stomach muscles.

First, blend all the dry ingredients together in a large bowl (flour – 4 cups only, salt, baking powder).  Add lard and mix into the mixed dry ingredients; the mixture should be crumbly when it is mixed together thoroughly.  Add the water; start with half the water and mix it into the lard and flour mix.  The masa should start to stick together into a firm dough. Add water a little at a time to make sure it mixes well, which will enable you to control the texture.  (Too much water can make the masa unusable to roll out.  If your masa is too sticky, add flour for firmness.)

Knead your masa for 5 to 10 minutes to make sure all ingredients are blended together, until the masa is a firm ball of dough.  Put the prepared masa into a plastic bag, making sure to squeeze out any excess air.  Let sit for 10 minutes.

Preheat the griddle or cast iron pan to cook your fresh tortillas. Set heat on medium.  The griddle or pan needs to be hot to cook the tortillas properly.

Remove the masa from the plastic bag and shape into medium-size balls; set them aside. The number of masa balls will vary, but usually you can make about 15.  Put the remainder of the flour in a separate dish.  You will use this to flour your counter and roll your masa ball.

Take a masa ball and, using your fingers, knead it into a flat patty.  Roll it in the flour dish and place it on your counter.  Place the rolling pin in the middle of the flattened masa ball and roll outwards.  Turn the masa ball over each time you roll it.  This will keep the masa from sticking to your rolling surface. The tortilla should be thin when it is completely rolled out.  Remove the tortilla from your rolling counter and hold it in the palm of your hand, then gently lay it on the heated griddle or pan.

Watch the tortilla rise; as soon as it does, use a fork or spatula to flip the tortilla. (Make sure to adjust the heat under your griddle so the tortilla doesn’t cook too fast.) The tortilla should rise when both sides are cooked. Turn the tortilla over a couple of times to make sure it is thoroughly cooked.  The tortilla should not have any raw dough; it will have brown spots from cooking on the heated pan, and should be light and airy.

Warning: If your tortilla rises while cooking, do not use your hand to squash it down.  It is filled with hot steam and could cause a serious burn. It should deflate by itself. Now that you have a stack of fresh homemade tortillas, pull out the butter, or pour a bowl of fresh beans, rice or make a delicious and hot burrito. You can put anything in your tortilla and it is going to be delicious!  Enjoy!