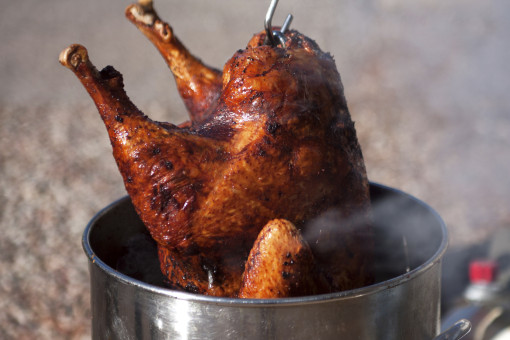 “There’s more than one way to cook a turkey, as Kathy’s deep fried turkey recipe demonstrates deliciously,” said Eric R. Gustafson, CEO of the 95-year-old company and an advocate of healthy animal fats in the American diet.  “Lard makes this recipe special, as it does for her recipe for deep fried jalapenos.  Both underscore our belief that natural, minimally processed food is the way to go.  It’s always wise to avoid industrially-produced partially hydrogenated fats in favor of animal fat shortenings, which have the benefit of being consistently delicious and promoting health.”  The recipes follows:

1 to 2 pounds of lard (you may need more or less depending on the size of the turkey and the depth of your frying pan)
1 extra large deep pan (approximately 12 quarts)
Prepare lard at medium heat, about 350 degrees (do not allow the lard to exceed more then 3/4 of the frying pan; the lard will rise when you put the turkey in)

Here’s a tip for measuring the right amount of lard: fill your pan with water to 3/4.  Drop the fresh turkey into the water, to measure how high it would rise in the deep-frying pan.  Remove the turkey and adjust the melted lard to that level, making sure it does not exceed the top of the pan or splatter over.

Allow for a cooking time of roughly 1 hour and 45 minutes.

Carefully remove basket with the turkey from the hot lard; drain the turkey. Use a meat thermometer and insert it into the thickest part of the thigh.  The thermostat should read 180 degrees F (80 degrees C). If it doesn’t, re-submerge the bird for another half hour.  When the turkey reaches the desired temperature, finish draining it on the prepared platter.

And it makes a great sandwich the next day, too.