This Father’s Day, Coast Packing Says ‘Go for the Flavor’ — With Healthy Animal Fats in the Mix, Give Dad a Tasty Surprise 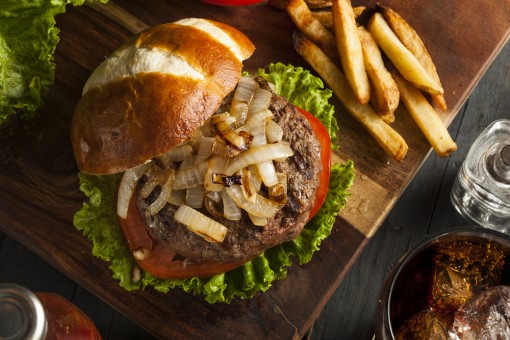 This Father’s Day, Coast Packing Says ‘Go for the Flavor’ -- With Healthy Animal Fats in the Mix, Give Dad a Tasty Surprise

It’s a cliché to say that the way to dad’s heart is through his stomach… but it’s true.

So suggests Coast Packing Company, the leading supplier of animal fat shortenings in the Western U.S.  “Father’s Day is typically given over to barbecue and other staples of early summer fare, but whether dad is doing the cooking or on the receiving end of a fabulous Father’s Day feast, there are a wealth of tasty options for families marking the holiday,” said Eric R. Gustafson, CEO of the 94-year-old company and an advocate of healthy animal fats in the American diet.

“You know that when Forbes includes artisanal fats in its Father’s Day gift guide, fat is definitely back,” Gustafson said.  “Forbes contributor Larry Olmstead has it exactly right: ‘Beef tallow can substitute for butter, is great for pan searing steaks, and has traditionally been used in everything from flaky biscuits to roasted sweet potatoes.  Pork lard also can lift up biscuits and pie crust, while it is perfect for frying almost anything.’  We at Coast agree, and we believe strongly that products like beef tallow and lard are best when minimally processed, which is consistent with the whole movement in food and cooking right now.  And nothing beats the flavor.”

Instructions
1. Melt 2 tbs tallow in a medium skillet over medium low heat.
2. Add sliced onion and season with salt and pepper. Allow onion to slowly carmelize, stirring occasionally; about 30 minutes
3. While onions are carmelizing, pre-heat grill on high
4. While grill is preheating, form ground beef into patties, season both sides with salt and set aside.
5. Thoroughly combine Cajun seasonings in a bowl and season both sides of burgers generously.
6. Grill burgers on high for approximately five minutes per side. Remove from grill and let rest another five minutes.
7. While burgers are resting, remove onions from pan and set aside.
8. Return pan to stove and melt remaining tallow over medium heat.
9. Add spinach, season with salt and saute until wilted, about two minutes.
10. Serve spinach as a bed for the burger with carmelized onions on top and enjoy

Pan-fried Xiaolongbao for Father’s Day
It may seem like Taiwan favorites xiaolongbao are hard to form, but once you try it out, it’s like “Hey, even I can make these.” Surprise your family!

1. Start with the prep work. Rip up the stick of kanten, put it into the oolong tea, and soak it until it has softened. Heat the tea and kanten until the kanten dissolves. Once that’s done, we’ll make the dough next.  Combine the flours, and add the lard, egg and water in that order. The dough should be about the same texture as your earlobe.
2. Make the filling next.  Chop the set kanten jelly up very finely, as fine as you can manage.
3. Combine all the flavoring ingredients with the pork, then add the kanten jelly and chopped leek. Mix it all up very well. Then, all you need to do is to fill the dumplings.
4. Cut the dough into portions, flatten each piece and form each dumpling. The dough should be about 1 mm thick, so aim for that.
5. Keep the cut up dough covered with a tightly wrung out moistened kitchen towel.  Each portion of filling should be a bit less than 1 tablespoon. Wrap each portion in the dough.
6. If you have a bit more filling, the dough will stretch so you can wrap more than you think.
7. Make sure to seal the dumplings very well. Line up the filled dumplings on a shallow tray dusted with flour.  Once you’ve formed about five dumplings, start putting them in the freezer. Now let’s start pan frying the dumplings.
8. Line a frying pan with oil and heat.  When it starts to smoke, pause for a breath and then put in some dumplings.
9. Add boiling water about 1/3 of the way up the dumplings, and cook over medium heat for about six minutes with a lid on.  When there’s almost no moisture left in the pan, take the lid off.
10. Lower the heat a bit, add a bit more oil and keep cooking the dumplings. This will brown them. The perimeter of each dumpling should turn the color of dark coffee.
11. If you’ve made it this far, all you need to do is to quickly take the dumplings out using a spatula. Start eating them while they’re still piping hot.

The Method
1. Fry the sliced onions in the oil for about 5 minutes or until tender. Add the potato and cheese, season well and set aside to cool.
2. Place the flour in a mixing bowl. Cut the butter and lard into cubes and add to the flour with a pinch of salt.
3. Using your fingertips rub the butter and lard into the flour until it resembles fine breadcrumbs. (or even easier, blend it in a food processor)
 — Add chilled butter cut into cubes to the flour, then pick up the butter with some flour using just your fingertips and break up and squash the butter into the flour.
 — Repeat until all the butter is broken into fine pieces and the mixture will look like breadcrumbs.
4. Add 3-4 tbsp ice cold water, gradually stirring it into the dough with a knife until it just sticks together.
5. Turn the mixture out on a floured work surface and knead gently into a ball. Cover with cling film and chill in the fridge for 15 minutes if possible. This will help the pastry relax and prevent shrinkage.
6. Pre-heat the oven to 220°C, 200°C fan, gas 7. Roll out the pastry on a lightly floured work surface. Using a saucer, cut out 6 circles (or make 12 smaller pies using a coffee cup saucer). If necessary re-roll the trimmings to make more.
7. Place a heaped spoonful of the cheese mixture in the center of each piece of pastry. Brush the edge of half the circle of pastry with a little water, then fold the two sides of the circle together to make semi-circles. Press down well to seal then place the pasties on a baking tray, sitting them sealed edge upright if liked. Crimp the edges between your fingertips
8. Brush the pasties with beaten egg. Bake for 25-30 mins until golden and hot.