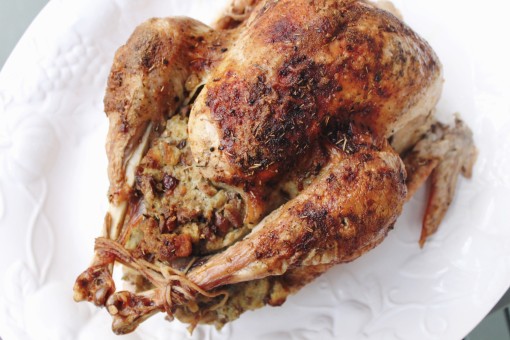 For easier carving at the table, cut out the wishbone from inside the neck end of the turkey, and make incisions where ball joints attach to small of back, cutting through to separate joints.
Slit skin over the breastbone from tip to shoulder. Slipping your fingers between skin and flesh, peel skin from each side of breast, peel skin from each side of breast, leaving skin attached to lower sides of turkey (skin will be used to cover breast after stuffing). Cut breast meat away from carcass on each side, scraping your knife close to the bones. Using heavy kitchen or poultry shears, cut out entire breastbone and half of rib cage. (Reserve bones for stock and turkey gravy.) Set turkey on V-shaped roasting rack, if available, to hold bird securely. Pull white tendon out from underside of each breast (add to stockpot). Slice meat into pieces about 3/8-inch thick and sprinkle with salt, pepper, and Cognac. Season turkey cavity likewise.

Fill boat-shaped cavity with stuffing, mounding it into shallow dome shape. Rearrange the slices of each breast over stuffing. Starting at tail end, sew the two flaps of skin back over the breast. If skin will not reach easily, remove some of the stuffing. It is better to have too little than so much that the skin might split during roasting. Extra stuffing can be cooked separately in a covered casserole in a bain-marie (water bath) for 1 hour; baste several times with some of the turkey pan juices. (Since there is no bread in the stuffing, turkey can be made ready one day before roasting. Wrap and refrigerate.)

Preheat oven to 425 degrees. Skewer neck skin to back, and truss bird. Massage skin all over with soft butter. Place lard or bacon strips over breast area. Set turkey breast side up on rack in roasting pan. Roast 30 minutes. Reduce oven temperature to 350 degrees and continue roasting, basting every 20 minutes with pan juices, for 1 to 1 1/2 hours, according to size of the bird.

Remove lard or bacon strips and continue roasting, basting every 20 minutes, for about 1 hour, or until meat thermometer registers 185 degrees F when plunged into thickest part of thigh (meat of drumsticks should be fairly tender when pressed). If skin begins to brown too much during this final period, cover bird loosely with foil.

To serve: Remove trussing thread before presenting turkey. To carve, remove leg-thigh section and wing from body on one side and cut into portions. Cut through center of breast and peel skin back to reveal meat and stuffing. Serve (after first few cuts you can probably use a spoon and fork). Continue with other side. Accompany with turkey gravy and additional stuffing.