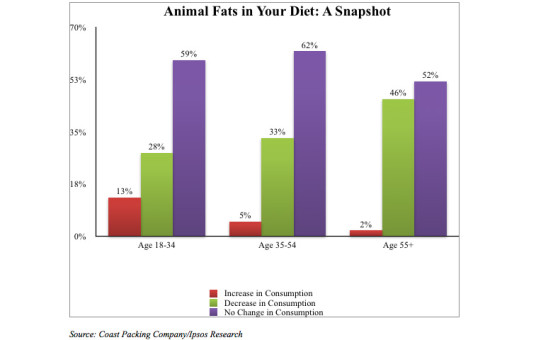 Baseline Study Examines What We Think About Animal Fats in Our Diet – And How We Behave; Among Those 18-34, the Game is Changing

VERNON, Calif. (December 2, 2015) - As the FDA clamps down on artificial trans fats in processed foods, a new consumer survey from Coast Packing Company and Ipsos Research indicates that younger Americans are more receptive to animal fats in their diet than their elders -- and are eating accordingly.

The survey of 1,000 adults, conducted in mid-November, examined how attitudes about animal fats in the American diet have changed in recent years – and how consumption patterns may be changing as well. Respondents were asked whether they were more or less open to animal fats, and whether those views extended to actual behavior.

The clear finding: where animal fats are concerned, youth will be served.

“Trans fats are out, and minimally processed animal fats – in the form of lard, derived from pork, and beef tallow – are decidedly making a comeback,” said Eric Gustafson, CEO of Coast Packing Company, the number one supplier of animal fat shortenings in the Western United States. “Millennials are concluding that animal fats have been demonized for too long. The reality is that animal fats, in moderation, are not as problematic as they once were thought to be, and the replacements for them are actually worse than originally thought. And in today’s foodie culture, taste is increasingly on par with health concerns.”

Age is the most decisive differentiator among the various demographic filters, the survey found. Flipping the age bracket around, a greater percentage of those 55 and up were less open to animal fats (35 percent) than any other age group, by a roughly 10 percent margin. Those 35-54 were most set in their ways, with 67 percent indicating that there had been no change in their attitudes in recent years.

“While we’re heartened to see the generational shift, we recognize that traditional ways of thinking and eating don’t change overnight,” Gustafson said. “It’s important to recognize first and foremost the natural makeup of both lard and tallow. Neither contains the artificial trans fats you find in hydrogenated shortenings. We believe strongly that these products are best when minimally processed, which is consistent with the whole movement in food and cooking right now.

“When considering ingredient statements, the fewer on the deck, the better,” he said. “That tends to make the product healthier than having it contain any number of things you can’t pronounce. In addition, the polyunsaturates in lard and tallow are also higher than in other shortenings and oils, so there’s some real benefit there. We look forward to revisiting this study in the months and years ahead, as the good news about animal fats reaches more and more people.”

The Coast Packing/Ipsos study was fielded from Nov. 16-18, 2015. Ipsos eNation surveys consist of a minimum of 1,000 completes with adults 18 years of age or older in the contiguous United States. The sample includes individuals selected from the online segment of Ipsos’ iSay/Ampario Panel, and is balanced to be representative of the general population based upon region, gender, age, and household income data from the U.S. Census Bureau. Results have a margin of error of +/- 3 percentage points. For a copy of the survey results, please email admin@edgecommunicationsinc.com.

Ipsos is a global independent market research company ranking third worldwide among research firms. The Ipsos team is passionately curious about people, markets, brands and society. Ipsos makes our changing world easier and faster to navigate, and inspires clients to make smarter decisions. The company delivers research with security, speed, simplicity and substance. Ipsos is one of the world’s largest independent market research companies, and in 2015 it is celebrating its 40th anniversary.