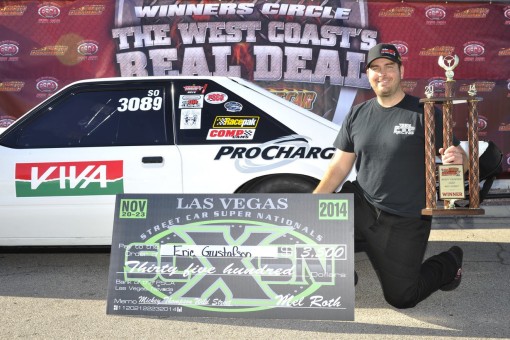 VERNON, Calif. (November 11, 2015) - Corporate sponsorship is a wonderful thing, but there’s nothing quite like driving the company logo across the finish line yourself.

In a remarkable two-fer, Coast Packing Company CEO Eric Gustafson – an accomplished drag racer– will be behind the wheel of his Drag Radial 1989 Ford Mustang, adorned with the Coast Packing banner, during the Jegs.com Street Car Super Nationals (www.streetcarsupernationals.com) at the Las Vegas Motor Speedway November 17-22.

A one-of-a-kind event, the Street Car Super Nationals (SCSN) attracts racers from across the U.S., Canada, Australia, the Middle East and England, all competing for some of the largest cash payouts in the sport, along with another $250,000 in posted contingency and bonus awards.  The field features champions past and present from the PDRA, IHRA, NSCA, NHRA, PSCA, NMCA, NMRA, No Mercy, Lights Out, Throwdown at T-Town, Orlando, Shakedown @ The Summit, and YellowBullet Nats, among others.  The SCSN lineup includes two Pro Mod classes, two Outlaw 10.5 vs 315 Radial classes, two dedicated Drag Radial classes, and another 250+ serious hot rods, along with a muscle car swap meet.

“This year’s SCSN figures to be an over-the-top event, a true test for everyone in a hugely competitive field,” said Gustafson, CEO of the 93-year-old Coast Packing, which remains both a market leader and a family business.  “We are pleased to help support this great event by becoming a primary sponsor for the XDR/True 10.5 class. It all comes down to this final race of the season, and we have every intention of giving it our all.  For our organization, that’s as true on the track as it is in business.”

The Coast Packing sponsored car, built by Racecraft, Inc., includes a 458-cubic inch, small-block LSX-based engine, itself designed and built by Kurt Urban and maintained by Jason Pettis at Pettis Performance.  Depending on whether the car is competing in eighth-mile or quarter-mile sprints, the team swaps transmissions.  A ProCharger F3 121 centrifugal supercharger supplies the boost needed to propel Gustafson and his Mustang on a set of Mickey Thompson 275 ET Street Pro Radial tires.  Jason Lee and Patrick Barnhill of PTP Racing tune the car and are instrumental in Gustafson’s performance. Earlier this year, the team sent the Mustang to Chris Acors of Acors Performance for upgrades, repairs and refreshing.

“This is a true team effort, with help from a tremendous group of partners and many others,” Gustafson said.  “That teamwork has helped shape the Coast Packing Mustang into a feared championship contender in any race it enters.”