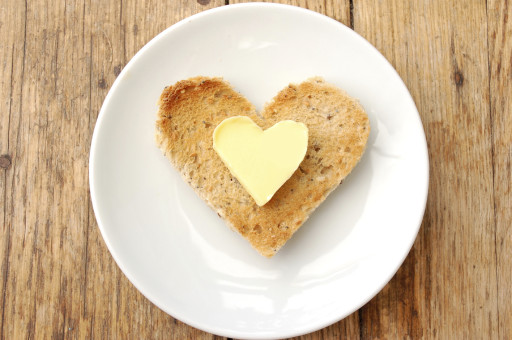 Julia Child, goddess of fat, is beaming somewhere. Butter is back, and when you’re looking for a few chunks of pork for a stew, you can resume searching for the best pieces — the ones with the most fat. Eventually, your friends will stop glaring at you as if you’re trying to kill them.

That the worm is turning became increasingly evident a couple of weeks ago, when a meta-analysis published in the journal Annals of Internal Medicine found that there’s just no evidence to support the notion that saturated fat increases the risk of heart disease. (In fact, there’s some evidence that a lack of saturated fat may be damaging.)

Since the 1970s almost everyone in this country has been subjected to a barrage of propaganda about saturated fat. It was bad for you; it would kill you. Never mind that much of the nonsaturated fat was in the form of trans fats, now demonstrated to be harmful. Never mind that many polyunsaturated fats are chemically extracted oils that may also, in the long run, be shown to be problematic.

But let’s not cry over the chicharrones or even nicely buttered toast we passed up. And let’s not think about the literally millions of people who are repelled by fat, not because it doesn’t taste good (any chef will tell you that “fat is flavor”) but because they have been brainwashed.

Many things have gone awry with the way we produce food. And it isn’t just the existence of junk food but the transformation of ingredients we could once take for granted or thought of as “healthy.” Indeed, meat, dairy, wheat and corn have become foods that frequently contain antibiotics and largely untested chemicals, or are produced using hybrids or methods that have increased yield but may have produced unwanted results.