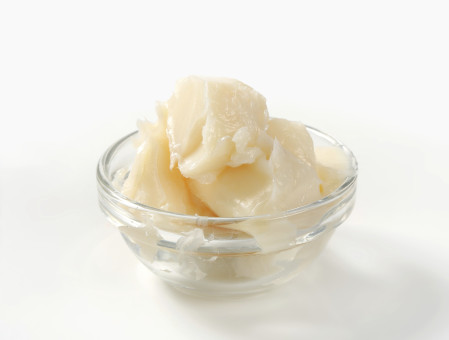 “Lard is an animal fat, and it is high in saturated fat and cholesterol. Doesn’t that mean it raises my risk for heart disease?” The pervasive myth that animal fats increase the risk of heart disease is just that – a myth.  Our great-great-grandparents consumed lard and butter and experienced extremely low rates of heart disease. Lard is part of a healthy diet and will not give you heart attack:

Like me, many of you choose to cook with coconut oil because it is a heat-stable cooking fat. Coconut oil does impart a mild-to-moderate coconut flavor to dishes, however. And while I enjoy the flavor, sometimes I want a neutral-flavored option. That’s when I choose lard.

For sautéing and deep-frying, nothing beats the cooking properties of lard. It creates a divinely brown crust to vegetables and meats without a distinct flavor. Due to the neutral flavor, it also works exceptionally well in baked goods (see #7).

I purchase quart-sized tubs of lard from my local farmer for $7.50 a quart. You will likely be able to find pastured lard at a similar price. If not, you can request pastured hog fat from your butcher and then render lard yourself (it’s very simple, here’s a tutorial).

When it comes to healthy cooking fats, lard is definitely the most affordable. For example, my other favorite cooking fats – coconut oil and grassfed butter – cost exponentially more.

5. Lard is high in vitamin D

There is a catch, however: only lard from pastured hogs contains vitamin D, since the pigs must have access to sunlight to synthesize the D and store it in their fatty tissues. Grocery store tubs or sticks of lard are from confined, antibiotic-laden pigs and should be avoided. Purchase your lard from a butcher or farmer who can tell you how the pigs are raised.