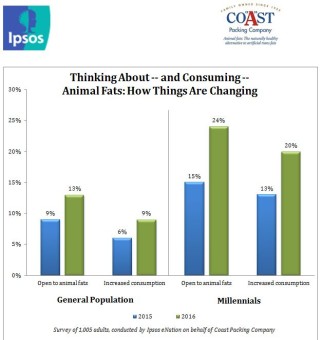 One Year After Original Baseline Study, Findings Show Changing Attitudes and Behavior – Especially Among Those 18-34

Affirming that changes in how we eat aren’t part of some food fad, a new consumer survey from Coast Packing Company and Ipsos Research indicates that younger Americans are even more receptive to including animal fats in their diet than they were a year ago — and are acting accordingly.

And millennials – those ages 18 to 34 — are not alone: overall, 13 percent of all survey respondents are open to animal fats, up from 9 percent a year ago, and 9 percent say their consumption has increased, compared with 6 percent in 2015.

Among millennials, attitudes have changed significantly. In this year’s study, 24 percent say they are receptive to animal fats, a marked increase over the 15 percent who held that position last year. In terms of what members of the youngest demographic are actually eating, it’s a similar story: 20 percent of millennials report having increased their intake of animal fats – a hefty jump over 2015, when that figure stood at 13 percent.

According to U.S. Census Bureau data, millennials are now the nation’s largest generation and include some 75.4 million people. Forty-one percent eat out at least twice a week, compared to 37 percent of Baby Boomers and a like number of Gen Xers, per a study from foodservice research firm Technomic. Millennials spends 15 percent more of their discretionary income on experiences than other demographic groups.

“This year’s results show both more openness to animal fat consumption and higher stated consumption of animal fats since the last time Coast and Ipsos posed these questions,” said Eric R. Gustafson, CEO, Coast Packing. “Clearly, healthy animal fats like lard and beef tallow are back, proving that last year’s survey was not an aberration. Everything old is new again, or so the expression goes. And that’s true in spades for one hugely influential segment of the population that may not quite remember the old days. In today’s foodie culture, taste is on par with health concerns — and nutritious animal fats deliver both.

“As we said a year ago, while we’re heartened to see this generational shift, we recognize that traditional ways of thinking and eating don’t change overnight,” Gustafson said. “It’s important to recognize first and foremost the natural makeup of both lard and tallow. Neither contains the artificial trans fats you find in hydrogenated shortenings. We believe strongly that these products are best when minimally processed, which is consistent with the whole movement in food and cooking right now.”

In analyzing the reasons behind the change in attitudes, Gustafson cited a recent Journal of the American Medical Association (JAMA) Internal Medicine study implicating the sugar industry for manipulating information to shift responsibility for heart disease away from sugar and toward saturated fat intake. “That’s just one example among many that have emerged in recent years, indicating that, when it comes to healthy animal fats, Americans have been sold a bill of goods,” he said. “Perceptive journalists, commentators and consumers are finally paying attention, as our survey indicates.”

According to the survey, those in the 18-34 age bracket are still twice as open to animal fats as the next oldest group (35-54) – 24 percent to 12 percent – but the numbers have increased for both groups. Millennials are eight times as open as those 55 and over (3 percent). Behavior does indeed follow attitudes: by a wide margin, those 18-34 continue to lead the charge back to animal fats. Fully 20 percent say their consumption has increased – dramatically higher than those 35-54 (9 percent) and those 55+ (1 percent). Thirty-two percent of those 18-34 say they have reduced their intake of animal fats, vs. 35 percent of those 35-54 and 51 percent of those 55+.

Age remains the most decisive differentiator among the various demographic filters, the survey found. Flipping the age bracket around, a greater percentage of those 55 and up were less open to animal fats (40 percent) than any other age group, almost double the response from millennials. Those 35-54 were most set in their ways, with 61 percent indicating that there had been no change in their attitudes in recent years.

About the Survey
The Coast Packing/Ipsos study was fielded from Oct. 2-5, 2016. Ipsos eNation surveys consist of a minimum of 1,000 completes with adults 18 years of age or older in the contiguous United States. The sample includes individuals selected from the online segment of Ipsos’ iSay/Ampario Panel, and is balanced to be representative of the general population based upon region, gender, age, and household income data from the U.S. Census Bureau. Results have a margin of error of +/- 3 percentage points. For a copy of the survey results, please email admin@edgecommunicationsinc.com.